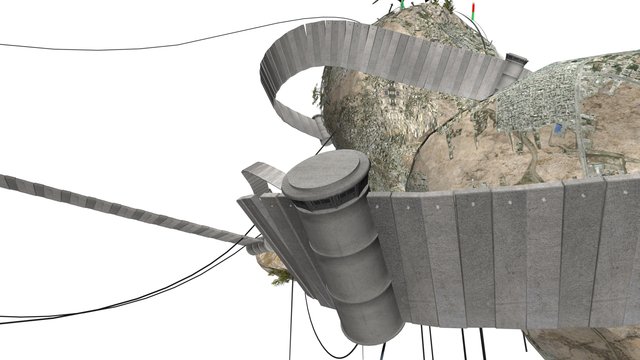 Abstract:
A 3D animated short, “Occupation: Movement I” it’s an expansion of a visual systemic language to a real-world conflict situation. The video is a continuation of the Syscapes research project, an open-ended work, consisting of modular sequences depending on in-situ conditions.

Biography:
ERIC SCHOCKMEL *03.08.1982 in Luxembourg – living & working in London Coming from a graphic design background, Eric Schockmel deals with the communicative aspects of visual narratives, especially concerning political subject matters. During his BA studies, he broadens the use of mediums from posters and still images to video art and the moving image in general, before finally investigating digital 3D animation as a medium of choice during a Masters course. The outcome of the latter is a research project, entitled Syscapes, which aims to find a graphical language exploiting and adapted to all the inherent properties of 3D space. The evolution of the project has so far yielded a series of narrative shorts as well as a collection of purely conceptual animations, instances of which have been shown at exhibitions and film festivals in London, Tokyo, Paris, Berlin, Beijing, Luxembourg, the US and Australia. The shortfilm Syscapes # Interlude was nominated for the Young Illustrators Award and shown at Illustrative 2008 in Zürich and has an upcoming screening at Transmediale.09 in Berlin. It received a “Jury Recommended Work” mention at the Japan Media Arts Festival 2008 and will be shown at its spring 2009 exhibition at the National Art Center in Tokyo. An adaptation of the Syscapes for a 22-screen installation by Konstantin Grcic & Nitzan Cohen was specifically created by the artist for MUDAM Luxembourg’s medialab during the exhibition ELO. Inner Exile – Outer Limits. Eric Schockmel has graduated with distinction from Central Saint Martins College of Art and Design, London (MA Communication Design / Digital Media) and Ecole de Recherche Graphique, Brussels (BA Graphic Design & Video Art).