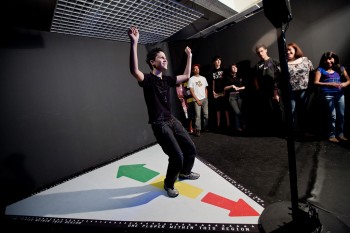 Abstract:
“Body Hack” is a full body interactive cinematic role hacking karaoke game. It allows players to hack iconic cinematic or tele-visual figures with their own body and their on-screen double. It triggers one’s desire of imitating known personae in a hilarious situation. Nevertheless, it raises critical issues of our embodied experience with the mediated body. As a cinematic game, Body Hack creates a space for the audience to rethink the relationship between media and themselves. Through the full-body interactive system, the audience is requested to perform under visual instructions. A projection will be presented with a paused movie and a character’s posture as a green contour. Player will see his/her on-screen double as TV static. The setup requests the player to fit in corresponding gestures, and the continuous synchronization of movement will progress the movie frame-by-frame as if the audience’s performance becomes the media’s time. The perfect combination of gestures serves as a key to dissolve the TV static, and to reveal the player’s appearance on the screen replacing the original character. Under such setting, the game invites players to engage in an uncanny body rhythm and movement under the constraint of media. It provides a space for players to immerse in compelling cinematic environments, which blur the line between identity and representation, and the relationship between self, media and pop culture. It attempts to foreground the audiences’ awareness of media’s pervasive influences through the physical body. The exhibition of this project is supported by the Arts Development Fund of the Home Affairs Bureau, the Government of the Hong Kong Special Administrative Region.

Biography:
Eric Siu is a new media artist raised in Hong Kong. He is currently a resident artist of the Ishikawa Oku Laboratory at the University of Tokyo. In 2010, he received his MFA from the Department of Design Media Arts at UCLA after completing a 12-month cultural exchange and research project in the United States, funded by the Lee Hysan Foundation, Asian Cultural Council. Before this trip, he taught at the Hong Kong Institute of Vocational Education (Kwun Tong) for two years, and had earned his bachelor degree from the School of Creative Media, City University of Hong Kong. Eric’s video art and multimedia works have been shown both locally and internationally, including USA, Australia, Japan, Korea, Germany, and Poland, among others. His video short “Sliding Whites” received an honorable mention from the WRO 05, 11th International Media Art Biennale, Wroclaw, Poland. Since 2008, he serves as a board member of Videotage, Hong Kong. Eric has a broad interest in animation, video, installation and interactive art. He loves to create interesting spectacles and to transform human perception and experience to sensorial levels. His work always blurs the boundaries between high and low culture, and at the same time provides laughter and amusement that entail critical thoughts. He explores media in a raw and primitive perspective.