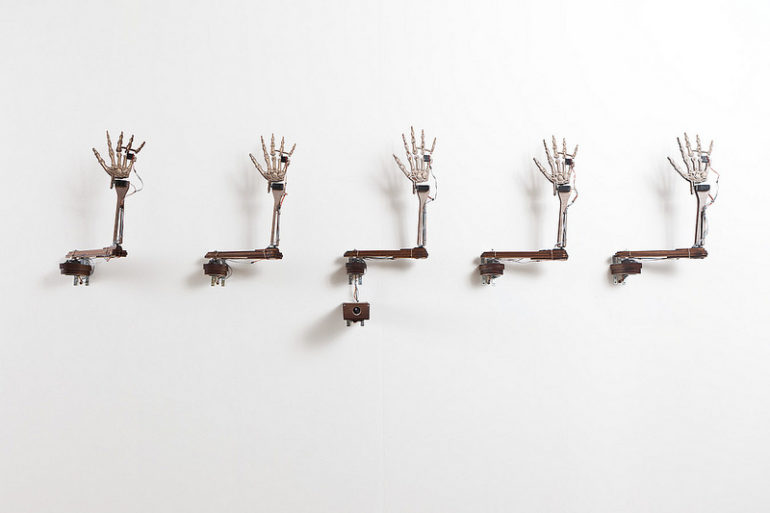 “Please smile” is an exhibit involving five robotic skeleton arms that change their gestures depending on a viewer’s facial expressions. It consists of a microcontroller, a camera, a computer, five external power supplies, and five plastic skeleton arms, each of them with four motors. It incorporates elements from mechanical engineering, computer vision perception, to serve artistic expression with a robot. Audiences interact with “Please smile” in three different ways. When there are no humans within the view of the camera, the five robotic skeleton arms choose the default position, which is bending their elbows and wrists near the wall. When a human steps within the camera view, the arms point at the human and follow his/her movements. Then, when someone smiles in front of it, the five arms wave their hands. Through artwork such as “Please smile,” I would like to foster positive audience behaviors.

Hye Yeon Nam is a digital media artist working on audio/video/robotic installation. She is a Ph.D. candidate at the Georgia Institute of Technology and holds an M.F.A. in digital media from the Rhode Island School of Design. She foregrounds the complexity of social relationships by making the familiar strange, and interpreting everyday behaviors in unexpected ways. Hye Yeon’s art has been showcased in Smithsonian Institute in Washington D.C. (2011-2012), Times Square, the art gallery Eyebeam and The Tank, the conflux, the D.U.M.B.O. Art Festival in New York, SIGGRAPH (2008, 2010), CHI (2010), NIME (2010), the Lab in San Francisco, and several festivals in China, Ireland, the UK, Germany, Australia, Denmark, and Switzerland. Her work has been broadcast on the Discovery Channel (Canada), and published in Wired, Leonardo Journal, and Makezine, among other publications.