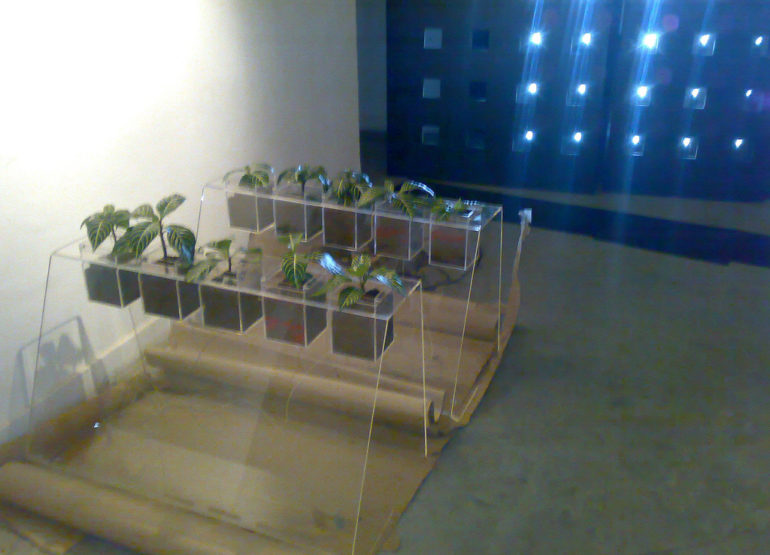 Abstract:
A garden with ten electro-organic plants. Real plants acting as input to generate sound and image. Ten live beings which are touched by persons (as any other plant is touched) generate sound and image on the screen, specially built to detect this interface. A real sensorial relationship between technology, touch and the organic. When each plant is touched, it generates a distinctive sound and activate the light screen in a particular way. Each plant will have an anima or electronic consciousness, a spirit with individual synthetic (programmed) character that will develop with the art piece. They will connect among themselves with love and envy when nobody interacts with them. Synthetic emotions are determined by the interaction with the audience, generating pieces that display the dialogue of emotive-electronic relations between plants. Maybe a plant is touched more than others, generating envy or admiration among the other plants. At the same time, they develop relationships of a certain affinity. All this dialogue can be seen on the light screen in the shape of sound and images, creating an extraordinary composition that is in constant progress. The composition is made up between the universal conception (electronic) generated by each particular plant, and concerning the other plants and the audience. All will be surrounded in an organic, naturalistic aesthetic, but electronic — an electronic and magic forest where matter gains life.

Biography:
Ivan Ivanoff and José Jimenez are self-taught artists, who started out as new media researchers and developers for different media labs and corporations such as Macromedia and Adobe. They founded together with Enrique Marmora a company called Estado Lateral, dedicated to the development of groundbreaking technologies for art and communication. They currently produce artworks that focus on delivering poetic content through an intimate experience with technology.”We confront our own beliefs, at the risk of compromising our certainties. To us, technology is a poetic resource that allows us to generate a new meta-language. We use generative algorithms and real time data analysis (like video or audio), as well as various techniques such as Augmented Reality or Mixed Reality. We are constantly researching and developing our own software and hardware technology.” The resulting artwork resorts to different media and is usually comprised of text, installation, graphics, web, video or software. Their work has been exhibited around the world in many cities, among them: Buenos Aires, Rosario, Caracas, Chicago, Mexico DF, Sao Paulo, Cologne or Girona. They received several awards, including the first prize in the Buenos Aires Museum of Modern Art’s Experimental Media Award, the first prize for an installation in the LEA Award and were finalist with different net art pieces in the last four editions of Flash Forward.