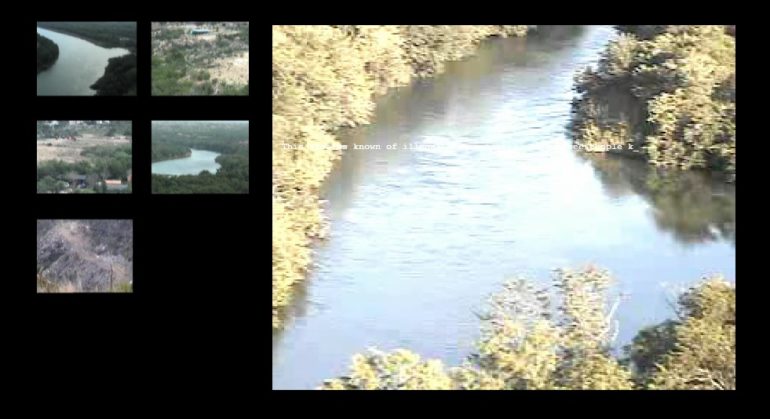 Abstract:
“The Texas Border” is an online audiovisual piece in which the live broadcasts of surveillance cameras placed by BlueServo along the US Mexican border in Texas are shown. BlueServo is an Internet platform run by The Texas Border Sheriff’s Coalition where several surveillance cameras are opened to anyone willing to control individuals attempting to enter the US in an illegal way and report those actions through a website. The piece also includes sixty four videos, part of the BlueServo archive, which show attempted incursions into the US territory that failed as a direct consequence of the reports sent in by anonymous BlueServo users. Assuming that the immigration of Latin American citizens into the US has increased since the US government started a highly aggressive campaign, in which they spent millions of dollars to guard the Southern border. The act of observation that aims to “protect” the country, has become a truly symbolic surveillance peformance carried out by US citizens, in which the images that appear on the screens don’t even need to be real.

Biography:
Joana Moll ( Barcelona, 1982 ) holds a Masters Degree in Digital Arts from the Universitat Pompeu Fabra, Barcelona, a BA in Visual Arts from the UAB ( Universitat Autònoma de Barcelona ) and a Degree in Industrial Design from Escola Eina, Barcelona. She has performed and exhibited her work internationally in venues such as Arts Santa Monica in Barcelona, the Center for Contemporary Art in Tel-Aviv, the Bat Yam Museum for Contemporary Art in Israel and in several Spanish and Israeli venues. She has curated the QuickFlick World International Video Festival in Tel Aviv and has organized several workshops and masterclasses in art and technology in Israel and Spain. Heliodoro Santos Sánchez (Colima, Mexico, 1984) holds a Masters Degree in Digital Arts from Universitat Pompeu Fabra in Barcelona and a BA in Visual Arts from the University of Guadalajara. He also attended the Basic Workshop Painting in the University of Colima and the Diploma in Arts, Media & Technology in the Centro de Cultura Casa Lamm, Mexico DF. He also has several parallel studies and courses in sound art, and graphic art with: Manuel Rocha Iturbide, Ivan Abreu, Betsabeé Romero, Santiago Ortiz and Graffiti Research Lab, among others. He has participated in several international festivals and exhibitions such as “TV / arts / TV” in Arts Santa Mònica, Barcelona; The Biennal Manif’d’art 3 in Quebec; the Zeppelin festival in Barcelona and in many biennals in Colima, Mexico. He had over 10 solo exhibitions, public performances and a score of group exhibitions in Mexico.