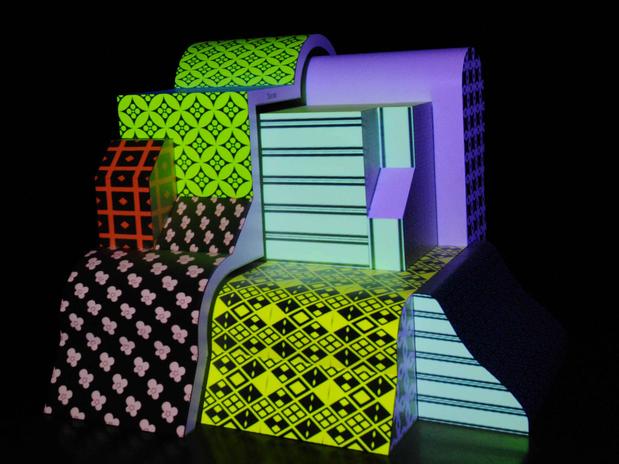 Abstract:
Building, designing, and interacting. In this interactive sculpture by Marcio Ambrosio, the spectator-user participates actively. The visitor begins working on a touch-screen, adding and changing colors, textures, and animation sequences that are projected onto the sculpture in real time, while other participants can interact with its proximity or touch the sculpture itself. The piece then changes due to the contact with the public creating volumetric effects, movements, and synchronicities among the forms. The combination of the aesthetics pre-designed by the artist and the possibility of interaction make Interactive Mapping a curious experience of learning and reflection on cause and effect in the digitized world.

Biography:
Animation and interactivity are Marcio Ambrosio’s marks. The artist has a degree in industrial design at FAAP and worked over the years as a graphic artist and animator. He moved to Brussels in 1999, where he worked in post-production studios for feature films, documentaries, and commercial advertising, founding in 2004 the collective zzzmutations devoted to produce short animated films and develop experimental projects. With works and participations in several countries, Marcio has a very unique curriculum, having received many scholarships and invitations to exhibit in several shows, including the IMAL (Interactive Media Art Laboratory), the National Arts Center (Tokyo), and the Fotomuseum (Rotterdam, Holland), among others.