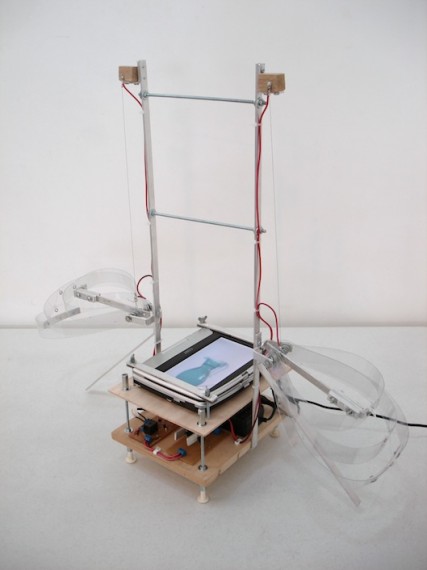 Abstract:
My work consists in the invention and construction of artifacts that are commanded by videos of animated objects. The objects are chosen from my daily life: my studio’s doors, teapots in the sitting room’s armoire, glasses and vases from my mother’s collection. All of it is filmed and their movements are emphasized during the process of edition, so as to create gestures that caricature human and animal behavior. Time manipulation in the video is determinant to the deformation of images, that are not mere representations of the real. I lend my own voice to objects and create the idiom spoken by them. The videos also emit musical notes that, when perceived by electronic circuits installed in the work’s body, coordinate sounds, electronic engines and muscles that make it move. In both works presented at FILE, “Liquescer (Jarrinho)” e “Liquescer (Jarrinho Azul)”, the objects chosen are water jars whose breathing has the rhythm of the liquid that enters and leaves them. Organisms react according to sounds emitted by objects in the videos. Like water, that has the shape of the recipient that contains it, the works’ sound and motor behavior is shaped by the jars’ language. There is an autonomy in machines that, departing from low and high-tech materials, command a dialogue that manifests through the precarious and uncertain movement of interaction among their parts. Contrarily to what might seem in a first moment, mechanisms only answer to internal stimuli. There is no direct relation with the audience, that stays as an intruder in a world whose communication happens in a sui generis form and is unintelligible to us.

Biography:
She lives and works in Niterói and Rio de Janeiro. The artifacts developed by Mariana Manhães command a dialogue that manifests itself through the precarious and uncertain movement of interaction between its parts. Those automate machines are controlled by video images of jars, teapots, lamps and the most different objects, all of them captured from the artist’s visual routine. Once filmes and edited, the objects gain caricatural gestures and their voices activate electronic circuits that turn on and off low and high-tech mechanisms in the work’s body, creating a random movement. Mariana had her artistic formation at the Visual Arts School at Parque Lage (1998-2006). She took part in several group shows in Brazil and abroad. In 2007 she made the solo exhibition “Liquescer”, at the Museum of Contemporary Art of Niterói (Rio de Janeiro). She was awarde with: Gilberto Chateaubriand Prize at Bahia Salon (2005); Goiás Salon (2006); Visual Arts Prize Marcantonio Vilaça FUNARTE / MinC (2006). She was recently awarded a honorable mention by Sérgio Motta Prize of Art and Technology (2007).