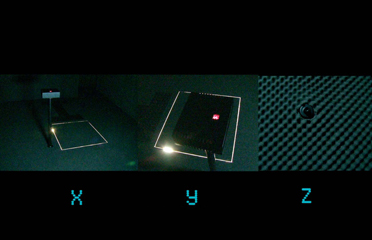 Abstract:
“XYZ” is a sonorous-spatial-temporal installation which follows variable regulations collected through the data of the interactors: height, weight and cardiac frequency. These data are transformed in overlapping sonorities. In the space, we perceive the variation of these 3 coordinates; measurable and audible. The 3 parameters are: timbre, height and pulsation. The pulsation of the music is determined by cardiac frequency, the timbre of each fragment is determined by the height of the visitor and the tonality, by the weight. Each person generates 3 data, which will be the reference to create a single sonority. There is a limit of 7 overlaps of interactors which join in different layers of sonorities with a duration of 30 seconds to 1 minute, each sound in one speacher; the eight makes the first sonority disappear and be substituted, and so forth. The coordinates are captured in real time in function of the visitors of the installation. One moment that depends on our existence to happen – our body is transformed into a reference, a retransmitter of data; bodies independent from one another linked simultaneously and sonorously: be one and many. “…it is memory, but not personal memory, outside that which it retains, distinct from a past which conservation it will guarantee; it is a memory internal to change itself, a memory that prolongs the before in after and prevents them from being merely instants that appear and disappear in a present that will incessantly be reborn. A melody that we hear with closed eyes, thinking only of it, is very close to coincide with this time which is the very fluidity of our inner life, but still has too many qualities, too many determinations, and it will be necessary to begin by erasing the difference among the sounds, and then abolish the distinct characteristics of the sound itself, conserve it only the continuation of what preceded in what follows and the uninterrupted transition, multiplicity without divisibility and succession without separation, to finally find fundamental time. Thus is the immediate duration perceived, without which we will have no notion of time.” Henri Bergson in The Nature of Time Technical production team: Creation and Production – Raquel Kogan Software and Sound Visualization – Alexandre Ribeiro de Sá Hardware – Gil Tadeu de Sá and Luiz Fernando Ribeiro de Sá Sound Composition – Guilherme Schwenck

Biography:
Raquel Kogan: BA in architecture. Awarded at the Transmedia Itaú Cultural in 2002, made reflexão # 1, also shown in Ciber@rt in Bilbao. The investigation in digital media continues: projeção, 401; au.to re.tra.to 1, ocupação#1, reflexão#2 in the kinetic digital exhibition at Itaú Cultural and ZKM Center for Art and Media Karlsruhe, reflexão # 3 in the Festival Art@outsiders, Memória do Futuro in Itaú Cultural, File Sao Paulo / Porto Alleger and in the exhibition Instant at SESC. The video BMG 8970 was accepted at the 15th Vídeobrasil Awards; [[[prog: ME]]]; Rencontre Internationales Paris / Berlin. The object rever in featured at the Cultural Center of Spain in Montevideo, and the installation mov_ing in the Transitio-x Festival, Ctrl C + Ctrl V at SESC Pompeia and code_live in Vancouver. The interactive video installation ponte in being performed at SESC Paulista, Fundación Telefónica in Buenos Aires and the exhibit Agora / Ágora; the installation reler is presented at the 4th biennial of art and technology Art.ficial Emotion, participated in the File 2010, being awarded by File Prix Lux.