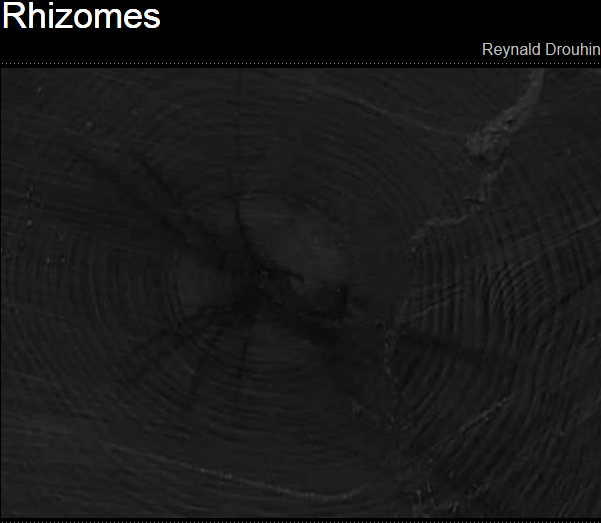 Abstract:
A collective and ephemeral work on Internet. “A rhizome does not begin or end, it is always in the middle, between things, interbeing, intermezzo. The tree is lineage, but rhizome is alliance, only alliance. The tree imposes the verb ‘to be’ but the rhizome’s fabric is the conjunction ‘and. and. and.’.” Gilles Deleuze & Félix Guattari, Rhizome in Mille plateaux.

Biography:
Digital material (net and video), he studied plastic arts at Paris Fine Arts School (DNSAP) and at University of Paris 1 (Masters, DEA) and a Hypermedia Multimedia Mastère (ENSBA). Reynald Drouhin has shown his work at ISEA 2000, in Paris, at the International festival of multimedia urban arts in Belfort, at the Biennial festival 2000 in Montreal and the International demonstration of video and electronic art organized by Champ Libre in 1999. He also took part in ISEA 97 in Chicago, Imagina in Monaco, (1998). He?s received several prizes and distinctions including the Grand Prix for Digital Creation and the Special Award of the Toshiba Jury in 2003, the Video Award of the FIAV in Tangers (2001), the Grand Prix at the Cyberfestival of Reuil-Malmaison as well as the AuvergnesVideoformes DRACs Multimedia Award in 1999. He has obtained several residencies: at C3 in Budapest (2000), at CICV in Belfort (2000-2001), at Europeo in Italy (2001) and at Carnegie Mellon University in Pittsburgh (1997). Currently he?s artist-teacher at Fine Arts School in Rennes and member of the Incident.net group.