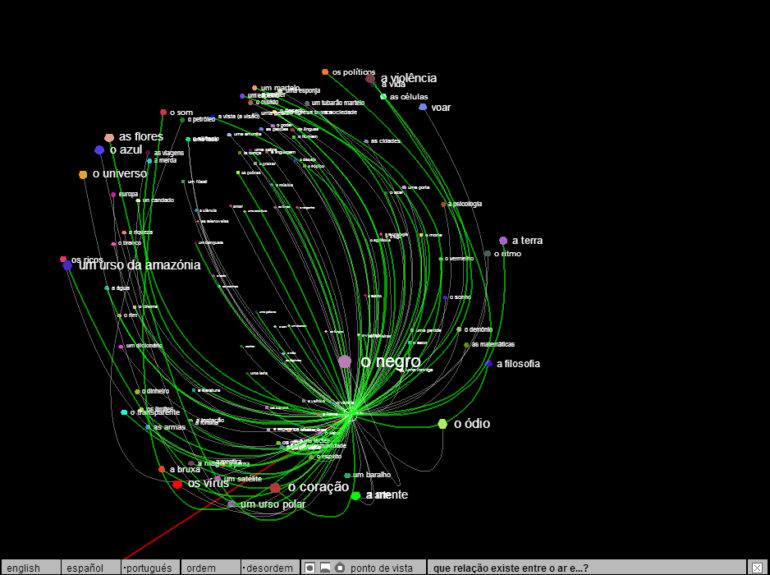 Abstract:
Spheres shaped by dialogue, a net of semantical combinations. The richness of words consists in their relations with one another. A single pair of words placed together is enough to create narrative, reflections, theories, poetry, humour, or even the arbitrary. Spheres is a project in constant evolution. At this point in time, there exist four spheres: Three spheres of words in distinct languages and one trilingual sphere, of recent publication, created as an interface of communication between the scientific and social communities. The spheres of relations, with available versions in Spanish (inauguration in March 2004), English (November 2004), and Portuguese (March 2005), are spaces of stimulation and inspiration; spaces in which a slow conversation among words can be developed, and through these words, among peoples. Upon selecting two words in the sphere, spontaneously or premeditatively, the question arises: What relation exists between them, between their meanings? Therefore one may respond with the first thing that comes to mind, search for a profound relation or merely arbitrary meaning. That which the spectator chooses to write, will live on in the sphere; others will read it and write new relations.

Biography:
Santiago Ortiz (Bogotá, Colombia, 1975) studied Mathematics at the Universidad de los Andes in Bogotá, Colombia; he also studied music and literature. He has taught at the School of Fine Arts at the University of Porto in Portugal, and at the Departments of Arts and Mathematics of the Universidad de los Andes in Bogotá. He has been a Professor of the Masters in Art and Technology at the European University of Madrid, and he teaches classes in Digital Design at the European Institute of Design in Madrid, among others. He is co-founder of the magazine for digital art and culture Blank, and a constant collaborator of the MedialabMadrid. His works are related with the intersections between art and science, artificial life, languages and narrative, information spaces, sound spaces and education. He publishes digital works, information about exhibnitions and texts in moebio.com. He has taken part in collective exhibitions with installations and interactive art, including: Mueso Inmaterial, MEIAC, Museo Extremeño de Arte Iberoamericano, Badajoz, 2005. banquete_comunicación en evolución (comunication on evolution), Madrid, 2005. Juego Doble, Centro Cultural de España, México D.F., 2005. Festival Internacional de Arte Electrónico 404, Rosario, Argentina, 2004. Periférico, a collective session of sound art, Laboratorio Arte Alameda, Mexico D.F., 2004 La mirada invertida, installation, Centro Cultural Conde Duque, Madrid, 2004. He has also shown his work in the solo exhibition El inventor de Historias -código, lenguaje y complejidad-, MediaLabMadrid, Madrid, 2004. banquete_ metabolismo y comunicación (metabolismo and communication), Madrid, 2003. Estampa, Salón Internacional del Grabado y de Arte Contemporáneo, Madrid, 2003. He lives and works in Cape Verte and Spain.