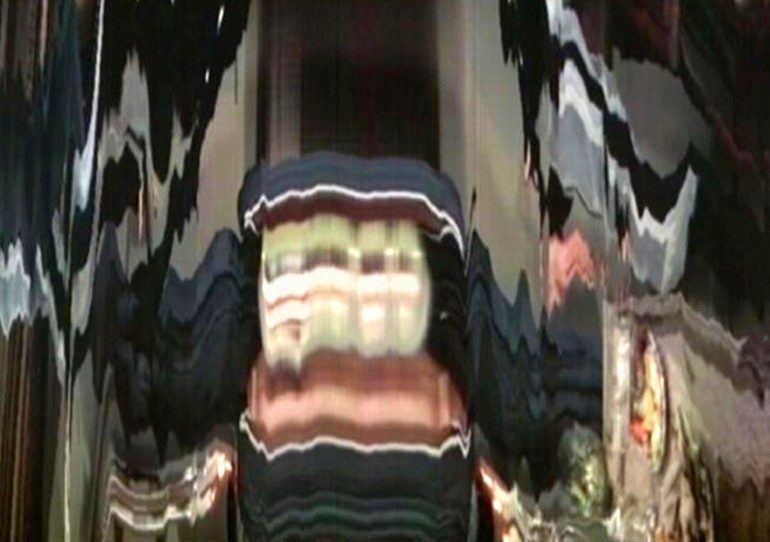 Abstract:
Hitchcock Skin (video 2’30”, 2012) A sequence shot displaying only a line from the very bottom of frames which overlaps in real time, the lines will accumulate as more frames from the film are shown and ultimately combine to reveal a newly created abstract form. The sound is the original one and is run through the same process: the audio of a frame is kept in a loop and the audio from the following is added in the same way. As the sequence develops, it builds up a “layered” sound. The image fills the full screen and freezes until the sound processing is completed, then you can hear the voice of the actor “Did it say why?”. “Hitchcock Skin” is a tribute to the director, the “skin” of the movie peeled off its form. As in a small thriller, several questions can be raised by the observant cinephile. Why show the bottom of the image? Which movie is that from? More connections unfold and manifest with each answer.

Biography:
Simone is a visual artist. She has attended cinema courses in Italy and Spain, the EAV Parque Lage courses and the study group for contemporary art by Charles Watson in Rio de Janeiro. From 2006 she has taken part in collective exhibitions. Her work has been shown at the 14th Salon of Bahia, the video installation “Memória de Superfície” exhibited at the Institute Brazil-Italy in Milan (2007), at the “Program Exposições 2008 MARP” and at the exhibition “Richard Wright”- Caixa Cultural (2010).