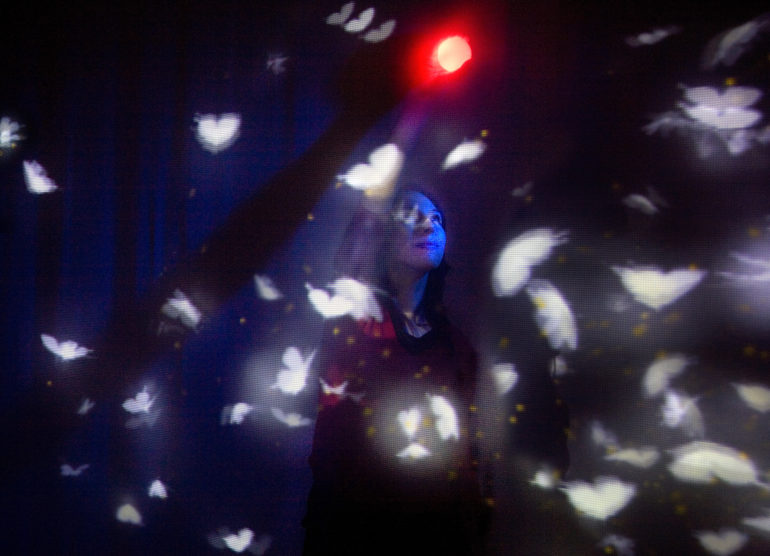 Abstract:
To explore a fantasy world experienced sometime and somewhere in our memory. Phantasm is an interactive installation in which participants light up in a small dreamlike world in space. As you take hold of a glowing sphere that releases a pale light, the area lights up in pale blue light, and white butterflies appear from nowhere as a soft piano melody flows. Butterflies fly slowly and gloriously, gathering toward the sphere, and chase you as you move the sphere. The sphere is the key to the real world and fantasy. Participants can experience the nostalgia of playing with butterflies by moving around or holding the sphere in the air. Beautiful white butterflies draw wing strokes in the air as if they are symbols of a fantasy world; they delicately lead you into their world. If you cover the sphere with your hands to shut out the light, the butterflies gradually disappear, leaving silence and lingering light, bringing you back to reality. You will find yourself perplexed as if it were a fleeting dream. Technical statement of “Phantasm” LEDs are used as the light source for the sphere which is the interface, so that the sphere glows in uniformity and allows the interaction of participants hiding the light or releasing the light with their hands. Light, color tone, and the position of the sphere are monitored with a sensor camera placed on the ceiling, and by connecting with real time CG, the butterfly movements (appearance, disappearance, gathering, and chasing) become possible. Real-time CG is projected onto a transparent screen with a projector. The image will not only appear on the screen but also appear on the farther wall as the projected images bleeds through the screen. Therefore, because the realm of interactive space includes the space between the screen and the wall, the participant is surrounded by the image. Those who observe from outside the screen will see a harmonized view of human and image, as if the participant were playing a role in a movie scene.

Biography:
Interactive artist, designer born in 1979. Graduated in Art and Information Design from the Kyushu Institute of Design. He is an interactive artist who harmonizes personal action with CG images, sounds, and lightings. He produces an interactive installation in which people can feel nostalgia of playing in the woods or exploring a fantasy world they dreamed sometime in their childhood. Currently, he is actively producing interactive space, such as in art installation and image advertisement; also directs concert halls and theaters.