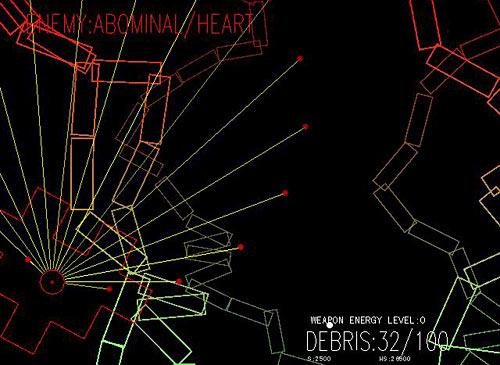 Abstract:
The eyes of mankind has decided to leave their hosts and take over the earth. Their first move was to escape to the moon, where they developed their hostile weapon technology. Ten years later they return and forcefully take over some prominent countries in Asia. Thailand and New Korea has both succumb to the hostile threat, while China insists on dealing with the eyes themselves and refuses any helping hands from around the world. America sends a pair of pilot twins with extroardinary sixth senses to battle against the evil eyes. They both have designed their own space ships that seems to be about the only thing in existance that can be used to battle these terrible fiends. Clean Asia! was designed for (and won) the Autofire 2007 competition at www.shmup-dev.com, it has three levels and two selectable ships (with distinct controlling differencies and weapons/abillities), fourteen bosses and around ten regular enemies.

Biography:
Jonatan Söderström, or “cactus”, is a 22 year-old Swedish game developer living in Gothenburg. His first finished game was released in 2005 and since then he has made around thirty games released for free on his website. His game Clean Asia was nominated twice in the 2008 Independent Games Festival and he is currently one half of the small game development studio called Lo-Fi Minds (lofiminds.com). He is mostly known for having a high creative output, and making somewhat bizarre games with unique presentations, low development times and experimental content.