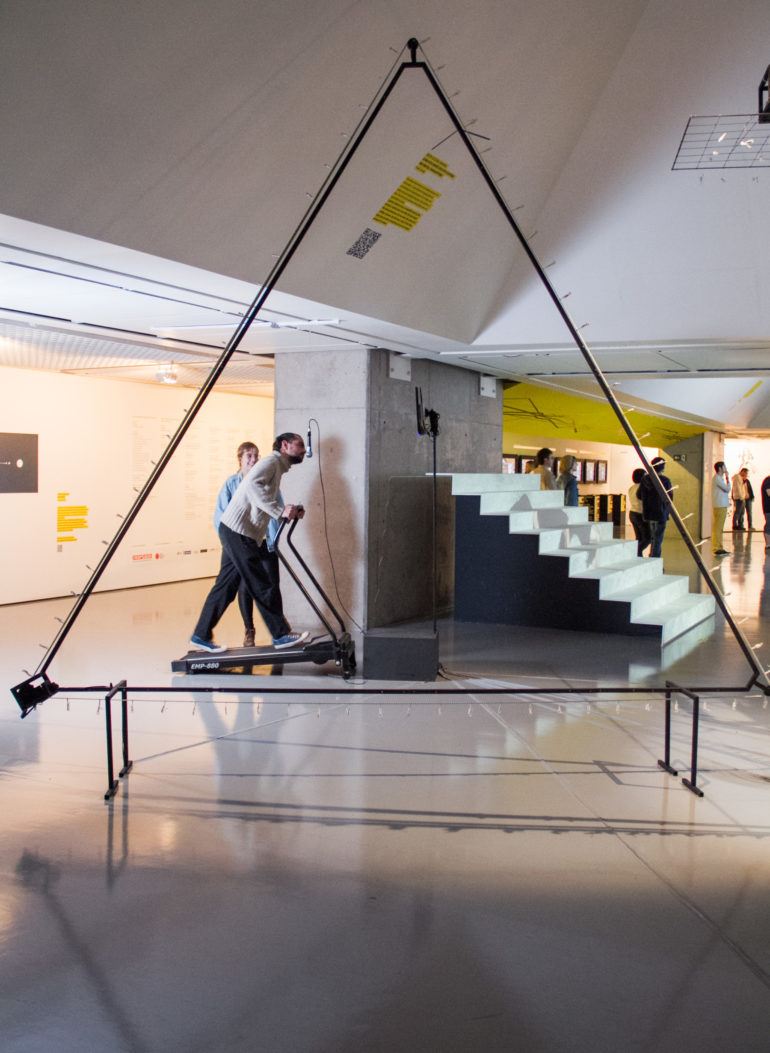 Down with Wrestlers with Systems and Mental Nonadapters!

Abstract:
From the special project of 4th Moscow Bienalle of Contemporary Art 2011, ”Rewriting Worlds: Dada Moscow’.’ Curator: Adrian Notz, Cabaret Voltaire, Zurich.
One needs to go on a run simulator to start up the process (a social mechanism). On one hand, one feels himself as the God, because the moving of the mechanism depends on his steps and on the other hand he is only one figure amongst the others.
The consciousness of visitors is bisecting – does the society absorb each of us? Or are we ourselves absorbed by this enslaving mechanism?
If one tells in a microphone a manifesto ”Dada”, the voice transfers a low-frequency impulse to the cellular structure, which begins to vibrate. As a result some of the figures fall off, liberated from the structure.
One conveyor belt has a micro video camera. It shows on a monitor a space inside a black box – in this box there is another reality, the world of the artist.
“The work of Dmitry Kawarga normally deals a lot with ideas of biomorphism. A term and a small branch in art history that was very much influenced and formed by Hans Arp. Not just remaining in biomorphism, like Arp, Kawarga adds a whole new social and urban dimension to the works that make us think of terms like ”rhizome” developed by the post-structuralists Deleuze and Guattari.
For Dada Moscow, Kawarga invented a totally new work, which seems to be quite different from the abstract biomorph works he normally does. It is an interactive installation that brings up a very powerful sense of the machine and technology fascination the society before the WWI had and it also shows the brutal consequence this fascination had. Kawarga creates a machine that brings the ideas of social models totally to the absurd.”
– Adrian Notz

Biography:
Dmitry and Elena Kawarga are two of the very few Russians artists who are specialized in high-tech arts. The most significant recent works are based on science art synthesis and are created with scientists and engineers. Installations and objects imply a biological feedback; they respond to the touch, the rhythm of the human body flow, voice, briefing and state of mind. www.kawarga.ru