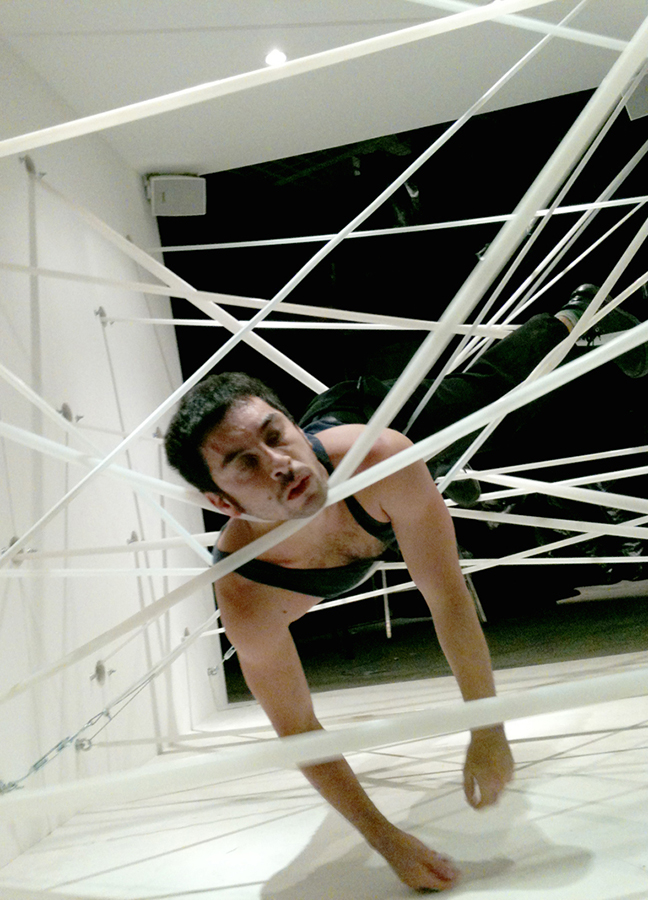 Abstract:
“De Novo, Ercília” (2012) is an interactive sound installation that invites the visitor to cross and experience body and sound standards, interacting with the elastics. In his book “The invisible cities”, Italo Calvino mentions Ercília, one city where extend wires designate the relations between people and things. From times to times, Ercília is abandoned and reassembled in another place.

Biography:
Graziele Lautenschlaeger is brazilian media artist and researcher graduated in Image and Sound from the Federal University of São Carlos (2002-2005). She is founder-member of LAbI – Laboratory of interactivity for Scientific and Technological Knowledge Diffusion of the same university. Her Master’s degree was conducted in the Architecture and Urbanism Department of the University of São Paulo, when she collaborated to Nomads.usp – Centre for Interactive Living Studies (2007-2010). In 2008 she was master exchange student in the Interface Culture Department at Kunstuniversität Linz, Austria. In 2010 she conducted lectures on Experimental Project and Interactive Installations disciplines at Uniara – Centro Universitário de Araraquara. She also worked as visitant researcher at Lagear – Graphics Laboratory for Architecture Experience, at the Federal University of Minas Gerais (2010-2011). In 2011 she was resident artist in the LabMIS program at MIS – Museu da Imagem e Som and from October to November 2012, she was resident artist at Salzamt Atelierhaus Linz, Austria. She currently lives and works in São Paulo as cultural agent at SESC – the Social Service of Commerce, curating and producing programmes in media art and digital culture.