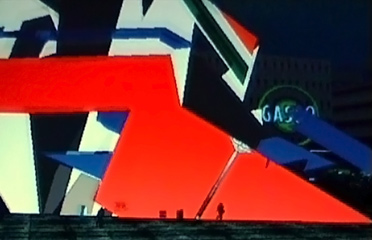 Abstract:
Abstract machinima experiments made by editing data files for the Mac game ‘Carmageddon’. These movies were created by editing the data which determines the crumple behaviour when the cars in the game crash. By inserting ludicrously large figures, and then repeatedly triggering the ‘bodywork trashed’ powerup via a cheat code, the player car is mutated into a jagged mass of mangled polygons which fill almost the whole screen, and becomes a moving virtual abstract sculpture. Various other modifications can be seen in the movie clips, including alteration of the weight of objects and arbitrary messed-up alternative texture maps for some objects and cars. Nothing was particularly planned, I just messed around with altering various things and recorded some of the results. Sound is Cementimental, noise added later. The original in-game sound was pretty good in itself but alas didn’t record well.