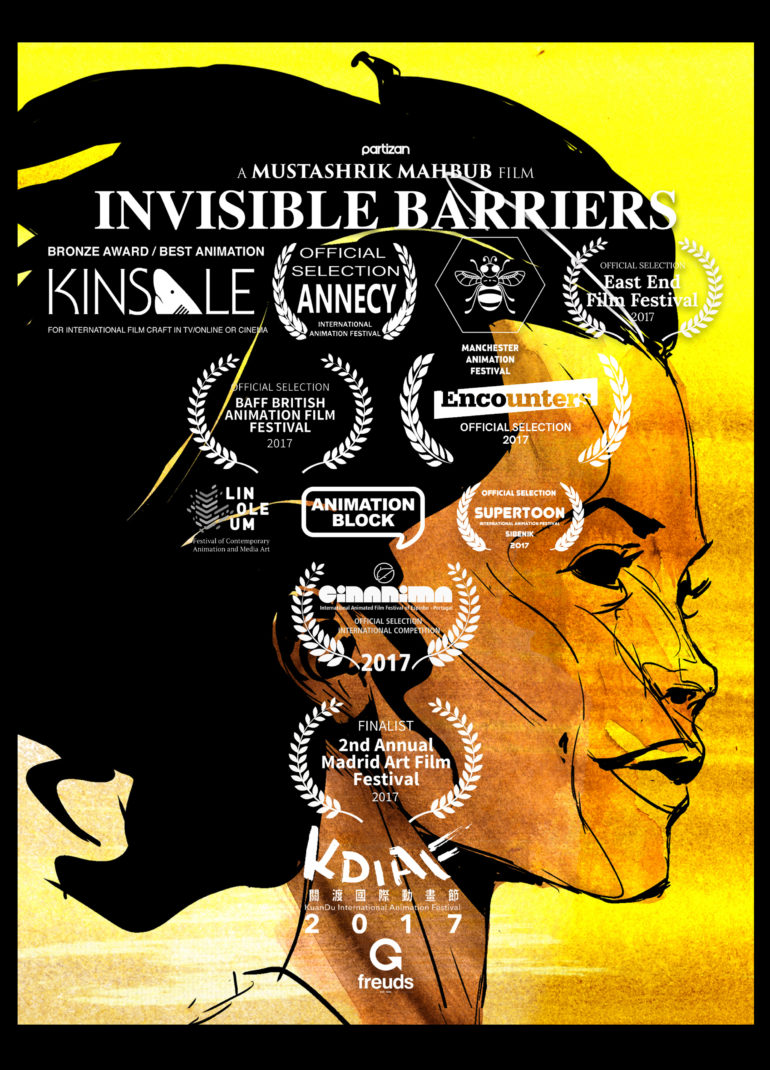 Abstract:
“Invisible Barriers” is a short animated film Directed by Mustashrik and produced by Partizan Animation in London, UK. The film was created as a visual poem to lead a new campaign that aims to support and encourage girls to believe in themselves in difficult regions around the globe, where societal change and growth is needed and should be positively encouraged. Collaborating with the powerful poetry of spoken word artist Bassey Ikpi, this animation hopes to lead an inspiring charge for girls of all ages and all races around the world.

Credits:
Commissioned by the Girl Effect (part of the NIKE Foundation) and brought to us via Freuds PR.

Biography:
Mustashrik cut his teeth as a Concept Artist, Character Designer, and Animation Director, working within the commercial industry for a decade, having told sequential stories through print and moving image for the likes of Louis Vuitton (a short film scored by Gustavo Santaolalla), Chloe, Michael Kors, and live-performance visuals for Ed Sheeran, before re-launching his career as a solo Director. His recent short film commissioned by the N.G.O Girl Effect, called “Invisible Barriers”, has garnered international acclaim and respect for it’s unique experimental approach and narrative style – making it’s debut within the Official Selection category of Commissioned Films last summer at Annecy International Animation Film Festival (2016). Since then it has gone on to be selected at numerous other festivals internationally and in the UK, including a win for a Bronze Award at Kinsale Sharks 2016, within the International Film Craft category for Best International Animation in Cinema, TV and Online. Currently Mustashrik is developing several feature film projects which has caught the attention of several Producers/Production Companies, and his original graphic novel (manga) adaptation of Shakespeare’s Julius Caesar has been awarded as one of the top Young Adult Fiction books published since 2000 by The American Library Association.