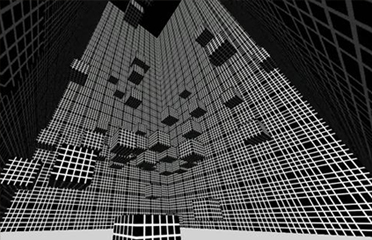 Abstract:
“Blue Monday Remix 2010” is a user-controlled open composition of the original 1983 song by the band New Order. Audio from the song has been separated and chopped into 3.6 second fragments. Each fragment is then looped and assigned to a specific cube within a computer-based 3D virtual environment that the user can navigate through from the first-person perspective. The finished version of the remix is fluid and determined by the actions of the listener within the simulated environment.

Biography:
Aaron Nemec received his BFA from the University of Michigan in 2001 and his MFA from Purdue University in 2011. The primary focus of his work is recombinant aesthetics in music and the listener-performer relationship. He is also a founding member of the rock band Drum Kit and conceptual art band The Meatballz.