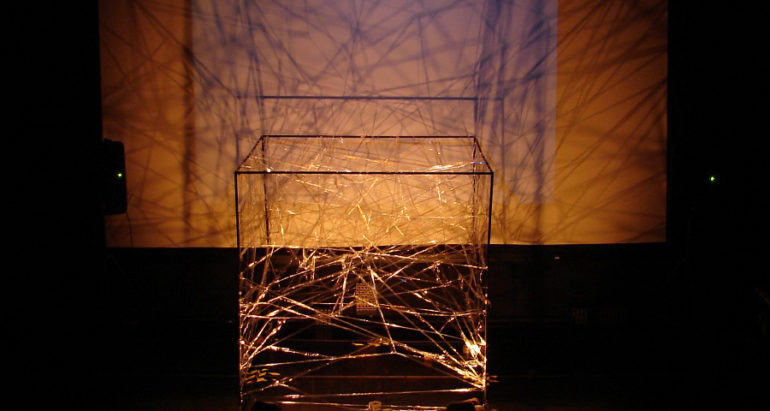 Abstract:
The project is based on the idea of “capture”, from a simple sound capture via microphones until the imprisoning of an image, which is built in front of the public, through the creation of a “cobweb” formed by adhesive tape in the center of a stage, supported by a structure in the shape of a paving stone fi xed to the ground, with a large screen behind, where images are projected. Two performers start the web’s live composition, intertwining it among the structures while they send, via microphones attached to their wrists, the sounds of unrolling the tape. The sound construction is formed by the tape sound, just amplifi ed, and by the processing in real time of those sounds via Pure Data, obeying to a specifi c script in which there are since untreated sounds until great density structures, redefi ning and imposing ambiguities to the relation between image and sound result. From a given moment on, sounds acquire a static character – in a freezing effect -, referring to the “capture” function of the cobweb, and serve as a subtle basis for the fi nal part of the performance, which consists in the overlaying of the web’s outline (in the foreground) on the screen, where its own images, taken beforehand, are projected in a subtle and long fade-in. That procedure generates an illusion of “movement” of the web, while the image gradually reveals itself. However, it remains static in front of the screen. The performance is concluded with the fi nal fade-in, while the back image fuses with the web’s outline in front. The sound conception doesn’t go towards an improvisation with the tape’s complex sounds, but rather an abstraction of the musical condition of sound, concentrating on the construction of a mesh of elements, in which tape, its sound and the projected image uniformly constitute the cobweb (Teia).

Biography:
Andrei Thomaz, 1981, holds a Master in Visual Arts from ECA/USP and works as professor at Istuto Europeo di Design in São Paulo. His artistic work is composed primordially by new media works and several collaborationships, that includes sound performances and interactive installations. He also actuates as an interactive developer, working with advertising agencies and TI companies to develop works for clients like AMBEV, Itaú, Coca-Cola and others. Lives and works in São Paulo, SP.