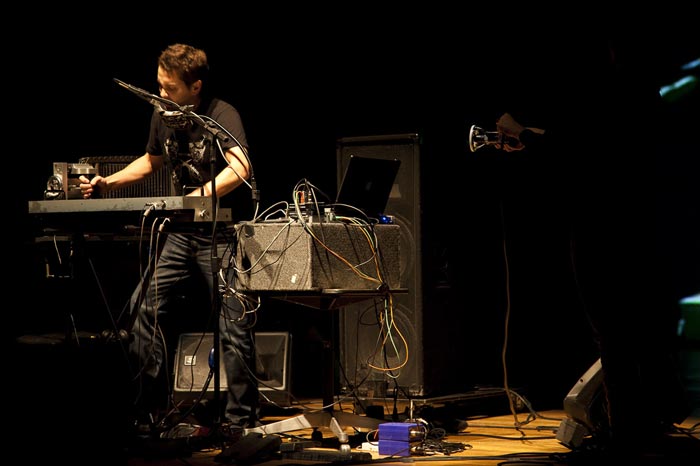 Abstract:
Tristan Shone is a mechanical engineer, sculptor (MFA, UCSD, 2007), sound artist (Author & Punisher) and creator of the Drone and Dub Machines industrial sound controllers. Alongside fabricating machines and composing sound for performance, he works at the National Center for Microscopy and Imaging Research at UCSD as a mechanical engineer. Author & Punisher is an industrial doom and drone metal, one-man band that uses primarily custom fabricated machines/controllers and speakers. These machines draw heavily on aspects of industrial automation, robotics and mechanical devices that he encounters through engineering work and sound machine fabrication. The devices focus on the eroticism of the interaction with machine, but also with the musical sensibility of doom, dub and heavy drone influenced music. He has performed and shown these machines in festivals and exhibitions in the United States and abroad (such as FILE-Sao Paulo, BR, and ALTA VOZ – Venice, IT). His newest album, “Drone Machines”, was released in 2010 on Heart & Crossbone Records out of Tel Aviv, Israel, and he is releasing a new full-length vinyl album in the summer of 2011 on Black Tent Press, at Los Angeles, CA. He received his BS in mechanical engineering from Rensselaer Polytechnic Institute in 2000 and went on to work for several years as an engineer at Corning, PerkinElmer and MChips in the semiconductor industry, while also playing in doom metal bands in and around Boston, MA. He then went on to get his MFA in visual arts from the University of California, San Diego, in 2007 with the Drone Machines as his thesis project.