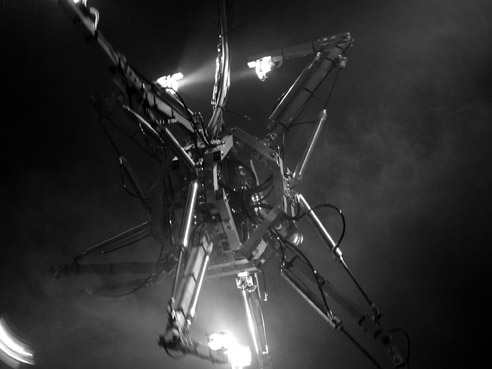 Abstract:
This project is part of a larger research program on the Aesthetics of Artificial Behaviors and is very much inspired of a previous work based on the Misery of the Machines (Bill Vorn, LP Demers, La Cour des Miracles, 1997). It is conceived on the principle of deconstruction, suggesting dysfunctional, absurd and deviant behaviors through a functional machine. It operates on a dual-level process expressing the paradoxal nature of Artificial Life.

The first prototype of the Hysterical Machine (renamed Pre-Hysterical Machine) has been presented at the Sentient Circuitry show at the Walter Philips Galery (Banff) from June 10 to July 26, 2002, the Fundacion Telefonica kiosk at Arco (Madrid, Spain) from February 12 to 18, 2003, and at the FILE 2004 festival (Sao Paulo, Brazil), from Nov. 23 to Dec. 12, 2004. We are actually building six more machines inspired by the prehysterical prototype that will be incorporated into a larger scale environment.

The Prehysterical Machine has a spherical body and eight arms made of aluminum tubing. It has a sensing system, a motor system and a control system that functions as an autonomous nervous system (entirely reactive). The machine is suspended from the ceiling and its arms are actuated by pneumatic valves and cylinders. Pyroelectric sensors allow the robot to detect the presence of viewers in the nearby environment. It reacts to the viewers according to the amount of stimuli it receives. The perceived emergent behaviors of this machine engender a multiplicity of interpretations based on single dynamic pattern of events.

The aim of this project is to induce empathy of the viewer towards a “character” which is nothing more than an articulated metal structure. The strength of the simulacra is emphasized by perverting the perception of the creature, which is neither animal nor human, carried through the inevitable instinct of anthropomorphism and projection of our internal sensations, a reflex triggered by any phenomenon that challenges our senses.

Biography:
Based in Montreal, Bill Vorn is active in the field of Robotic Art since 1992. His installation and performance projects involve robotics and motion control, sound, lighting, video and cybernetic processes. He pursues research and creation on Artificial Life and Agent Technologies through artistic work based on the Aesthetics of Artificial Behaviors.

He holds a Ph.D. degree in Communication Studies from UQAM (Montreal) for his thesis on Artificial Life as a Media. He teaches Electronic Arts in the Department of Studio Arts at Concordia University (Intermedia/Cyberarts program) where he holds the rank of Full Professor.

His work has been presented in multiple international events, including Ars Electronica, ISEA, DEAF, Sonar, Art Futura, EMAF and Artec. He has been awarded the Vida 2.0 award (1999, Madrid), the Leprecon Award for Interactivity (1998, New York), the Prix Ars Electronica Distinction award (1996, Linz) and the International Digital Media Award (1996, Toronto). He has worked in collaboration with many canadian artists (including Edouard Lock, Robert Lepage, Gilles Maheu, LP Demers and Istvan Kantor). He was cofounder of the electronic pop music band Rational Youth with Tracy Howe in 1981.