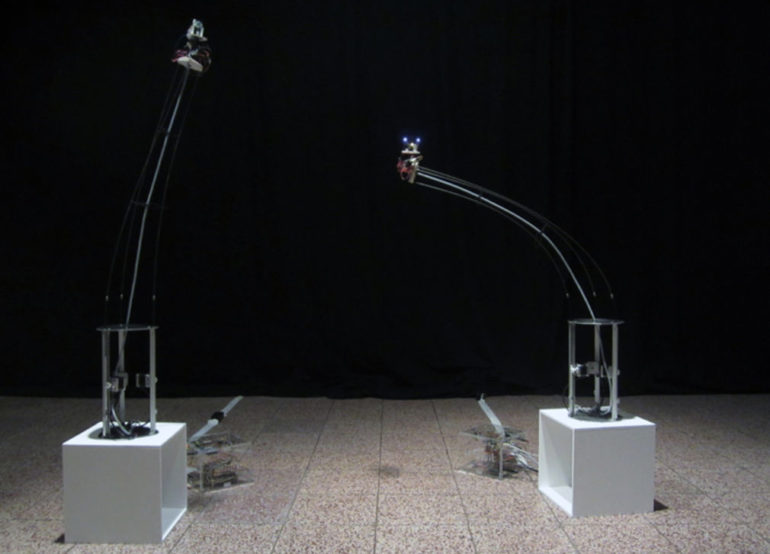 Love in the automation age: Two self-willed robots are in a bizarre conflict between each other and their surroundings. “Vincent and Emily” show the viewer the solitude of a partner relationship and simultaneously the involvement of the partners in society and their impulses. Analogue to human relationships, the two creatures stand for themselves and have to draw the line towards the outside.
As humans are only able to communicate their thoughts and emotions verbally and through their actions, likewise the two robots depend on their motors. The two technical creatures capture sounds and movements via sensors and react to those signals with expressions. Just like in each human relationship, it comes to misunderstandings: If Vincent sends positive signals by up and down movements, it is possible that Emily interprets even those signals as negative. Disagreement is preprogrammed.
The unpredictable interaction and interplay between Vincent and Emily, caused by their tense relationship, trigger the viewer’s individual projections. Intuitively he will be searching for the similarities to particular patterns of human behavior.
The movement of the robots is controlled by a pulling system, consisting of three motors whose rotation is transformed into a linear motion via gear wheels and gear racks. Due to the elasticity of the moving metal shafts, the actions of the couple become at the same time smoother and increasingly unpredictable, which results in an additional momentum of its own and a lightness and ease within their interactions.