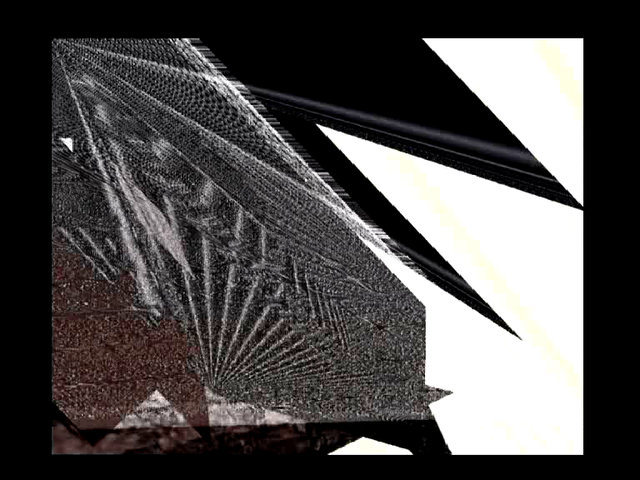 Abstract:
Chad and Julian were playing around with running some of their half-life levels on a Hercules card [KyroII chipset] using the wrong drivers [Nvidia Geforce 2]. They suspected this might lead to something interesting, as they have very different ways of handling OpenGL. At first they thought the screen had hung, then it twitched into action, revealing slithers of the map they’d tried to load. They hit the strafe key and fragments of toothy texture peeled around our dyslexic camera. Punching the air like heroes they dumped it onto DV while they fired a pistol into the splitting field and chatted to whatever distressed bots were in there. Though the audio was good, they dressed it up further – Julian added a bedevilled midi theme piece to draw a closer relationship between the ‘textile catalogue’ nature of Max_Miptex and visions of the ‘executive lounge’ in the early 80’s. Max_Miptex is offered as a kind of ‘glitch machinima’.

Biography:
Chad Chatterton is an Environment Artist currently living in Australia. He has contributed to various Art Game projects as well as building environments for Funcom’s Age of Conan MMO. Chad has traveled to remote areas of Japan and Europe, researching and photographically documenting both dramatic man-made environments such as Gunkanjima. Most recently he was employed as the Artist in Residence at the world-leading video games research group at ITU.

Julian Oliver is an New Zealander based in Berlin. He has been active in the critical intersection of art and technology since 1998. His projects and the occassional paper have been presented at many museums, international electronic-art events and conferences, including the Tate Modern, Transmediale, Ars Electronica and the Japan Media Arts Festival. His work has received several awards, ranging across technical excellence, artistic invention and interaction design. Julian has given numerous workshops and master classes in software art, augmented reality, creative hacking, data forensics, object-oriented programming for artists, virtual architecture, artistic game-development, information visualisation, UNIX/Linux and open source development practices worldwide. He is a long-time advocate of the use of free software in artistic production, distribution and education.