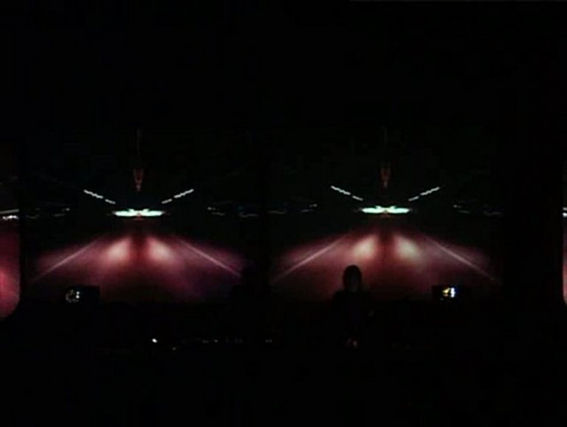 Abstract:
A performance focusing on the rhythmic relationship between light and sound. Light Turned Down is a live interchange between artists charting a conversational movement of colour, musical fragments, texture and image. Following a singular pulse at a propelling 128 beats per minute, Scanner will wrap sound around the beat as D-Fuse projects images in response, creating a uniquely live experience, each responding to the other. Scanner’s hypnotic score is beautifully visualised in an abstract world reduced to an abstract starbust patterning. Paths and borders overlap, as a tunnel of light is created using waves of traffic motion distorted and re-processed into a seamless fusion of graphics and live footage. Scanner + D-Fuse share a restless desire to search for the extraordinary in the ordinary, the colour in the darkness, the sound in the silence.

Biography:
D-Fuse search for concepts + ideas throughout the whole media-scape. We use + abuse the tools of the digital revolution to experiment + develop a unique language for the needs of the digital world. D-Fuse output spans from communicating ideas to time-based art, from cymk to rgb, from films to motion-graphics. D-Fuse’s unique visual art has been exhibited and performed at many International Film Festivals, including Sonar, onedotzero and Seoul + won the Netmage/Diesel Award for world VJing championships in Bologna, Italy. We have recently completed a commission by the musician Beck to create 14 films and re-mixes plus the entire interface of his new DVD. Released April 2005 globally. D-Fuse have released 3 x DVD’s D-Fuse Vs Nonplace, D-Fuse/Gasbook retrospective + D-Tonate_00, which was nominated “best DVD” at 2003 Music Week CADS Awards. www.dfuse.com Matthias Kispert has been active as a musician, sound artist + sound designer in London since 2000. His involvement with live performance started in 2000 with Crowd Formation, a “foreign mysterious sound manipulation collective, who congregate at irregular intervals + then disperse again”. Matthias’s collaborations with D-Fuse include live performances + sound creation. The sensibilities of his work are tuned to the experience of urban living, + delve into the relations between urban spaces + sound. These relationships are explored in Brilliant City. Dan Faulkner’s music is an experimental + eclectic mix, influenced by modern dance music, breakbeat, jazz + dub/reggae. He also has been playing saxophone in bands + with DJs around the world for the last 10 years, including events throughout Europe -Porto 2000, Cinematics [Belguim] Netmag [Italy], supporting Courtney Pine, Scanner + Lee “Scratch” Perry. Dan has been has been working closely with D-Fuse for the last five years focusing on Live performances in both the audio and visual sides.