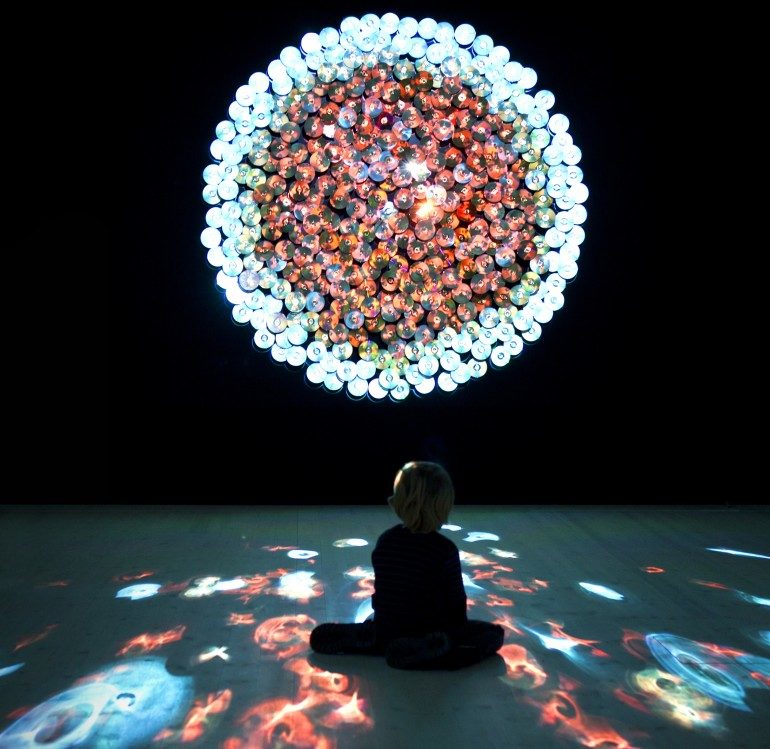 Abstract:
“Sikka” is a sculptural video installation constructed from used DVDs. This multi-thematic piece was inspired by sikka, the gold coins sewn to clothing dating back to Babylonic times that eventually became the shiny plastic objects we know today as sequins. By projecting the contents of the DVDs back onto their surfaces, the artist continues to investigate new uses for discarded objects as well as his interest in combining the phantasmagorical properties of cinema with its physical elements. In this case, film segments were selected from each of the DVDs for their color, shape and movement value, forming a digital palette from which the final projected loops were constructed. The accompanying self-generated soundtrack is the resulting “accidental composition” created by layering the soundtracks from the actual segments being projected. The final effect is that of an audio-visual mosaic.
Historically, sikka were worn to remind onlookers of the wealth and power of those wearing them, while also evoking the light of the divine. Similarly, the surfaces of the DVDs flash back at us images born from the glamorous world of Hollywood where image is converted to a kind of currency.