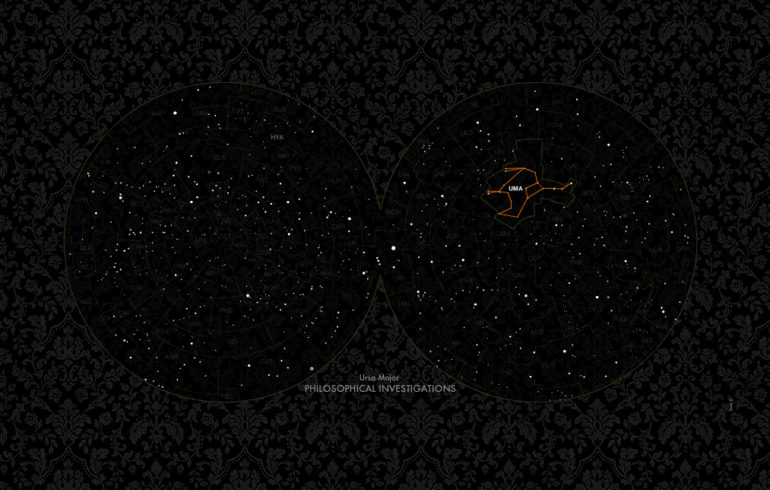 Abstract:
88 Constellations for Wittgenstein (to be played with the Left Hand)” is an interactive artwork by David Clark. The piece is a sprawling non-linear contemplation of the life and work of the Austrian philosopher Ludwig Wittgenstein consisting of 88 interactive flash animations each corresponding with one of the 88 constellations in the night sky. The viewer is invited to navigate through a maze of interconnecting narratives moving from association to association in a way that brings Wittgenstein’s work into conversation with our contemporary digital culture. As a nod to Wittgenstein’s concert pianist brother Paul who lost his right arm in World War One and continued to perform work for the Left Hand) the piece invites the viewer to interact with the piece using both the computer mouse and the computer keyboard – that is both the right hand and the left hand. This work is a continuation of David Clark’s interest in long form interactive narrative digital work for the internet.

Biography:
David Clark is a media artist who lives in Halifax, Canada, interested in experimental narrative form and the cinematic use of the internet. He has produced work for the internet, narrative films, and gallery installations. He produced the interactive narrative works: “88 Constellations for Wittgenstein”, “Meanwhile” and “A is for Apple” (which won the top prize at FILE 2002). Marina Roy is an artist who lives in Vancouver, Canada, and makes images, objects, and animations. She collaborates on performances and videos and has a writing practice in the form of essays and book publications.