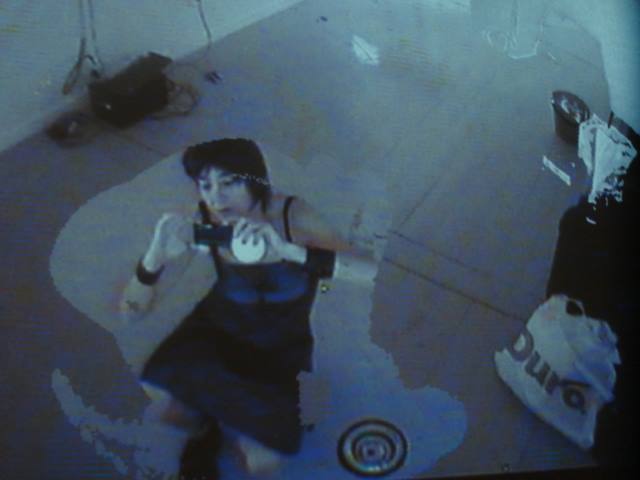 The Ball in The Hole

Abstract:
The Ball in The Hole is easy and fun. Using a colorful ball you can delete your projected image to see what (or who) is in the hole. You’ll enter a journey where you can understand and reveal the other through the erasure of the self. The person behind the hole will appear to disappear again. The emphasis is on the line separating and connecting the visual to the concrete world. The ball and the hole. The person’s movement is his deletion. The ball in the hole is a social installation/ performance where the user becomes the actor of metamorphosis. The discovering of the self and the legendary mirror to other dimensions are experienced through a real-time tactile digital environment. The Alter is someone else, and the deformation shown is a constant force that the user can apply to his virtual fi gure. The image becomes fragile and shows its temporary value. The refl ection of identity, reality and representation becomes a playful, intimate and dislocated game of drawing and deleting limits and borders.

Biography:
Xname alias Eleonora Oreggia A/V artist born in Milan. She graduated with honours in Semiotics of Animation at the University of Bologna. Since September 2003 she has been based in Amsterdam, where she worked in the Netherlands Media Art Institute and collaborated on projects like spring-alpha, ASCII, dyne.org and Streamtime. Combining programming, electronic music and visual culture, she creates audiovisual real-time performances and interactive site-specific installations to play with illusion, identity and metamorphosis. Kysucix alias Silvano Galliani Kysucix, programmer and hacker, uses free technologies as an ethical and technical choice. Recently fascinated by the magic of multimedia, he gets fun either creating technology to modify it, either using and abusing it. He’s researching in video streaming infrastructures using free software and open codes and in human-computer interaction, and currently finishes his degree in Computer Science in Milan.