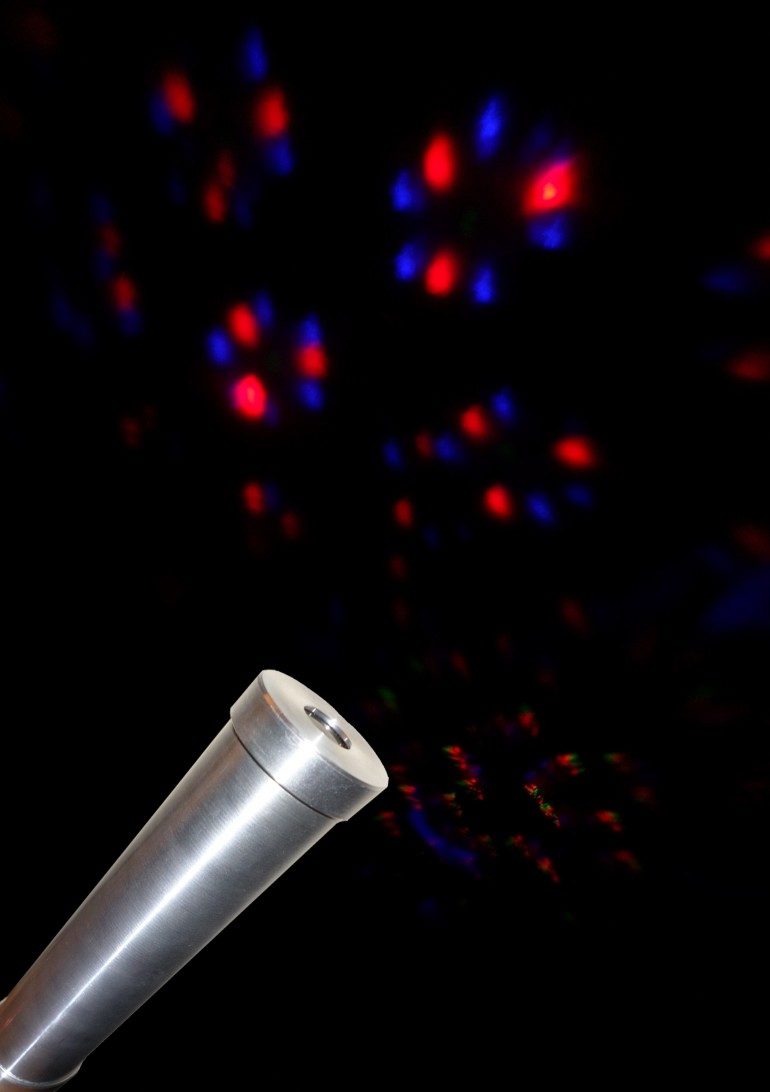 Abstract:
“Kaleido-Led” was based on the kaleidoscope invented in England in 1817 by Scottish physicist Dawid Brewster (1781 – 1868). “Kaleidoscope” comes from the greek words kalos (admirable, beautiful), eidos (design, image) and scopeo (to watch, to look at…). The images that generate the fractals use the reflex of the light produced by colored LEDs that flash for a certain time in three mirrors inclined in an angle of 45 degrees to each other.
In every movement, various combinations of visual effects (geometric designs / symmetric arrays) are formed. With a little more than a span in length and weighing 700 grams, anyone can interact, although its original purpose had been for scientific studies ends.
The kaleidoscope contains its own prior instructions (how to manipulate, how to look, how to hold and the right inclination) alleged as minor actions, but its purpose can’t be overestimated. Within electronic arts, “Kaleido-Led” is in the “Interactive Object” category, namely, an object of everyday use – in a way with a simple aspect – transformed into the form of interactive art.

Biography:
From the capital of the state of São Paulo, Eric Marke graduated in advertising and journalism and is a teacher with MD in communication. He is also a DJ since 1984 and an electronic musician since 1987. Since 2003 he participates of the organization and curatorship of FILE – Electronic Language International Festival. He is a university professor with a master’s degree in Electronic Art (Interactive Audiovisual Installations) of Anhembi Morumbi University (2007-2013) and Belas Artes University (2014 to now). He entered the arts scene in 1979 as a filmmaker while a boy, and became a researcher, historian and performer in later years.