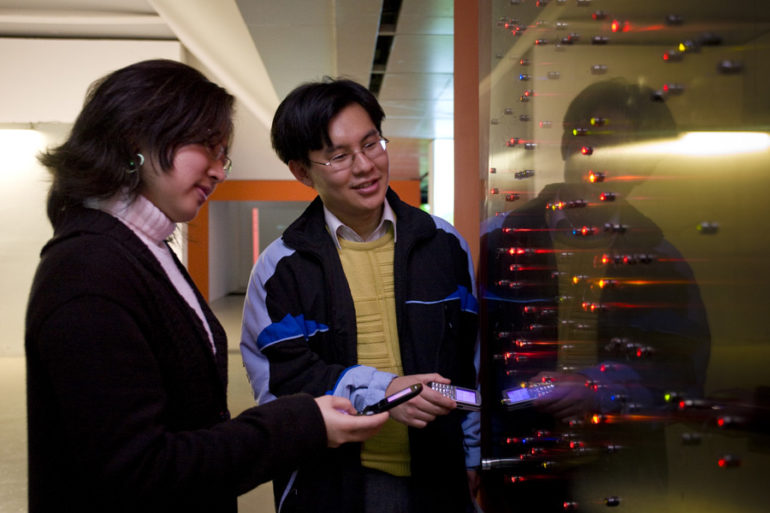 Abstract:
It is a glass-coated panel with small radio frequency sensors, commonly used in cell-phone pendants, sold in trinket stores. Those sensors are lighted when they capture the use of cell phones. When stimulated by certain electromagnetic transmissions (for instance, the use of other cell phones in the vicinity), they light up, making visible the presence of radio frequency emissions. The word “roaming”, that shows right under the light sensors, refers mainly to the term used to indicate phone transmission in places that are not their original area. Though it used in that way in Portuguese (as well as many others technological new words), in English the word means “traveling”, but can also mean “to walk aimlessly”. A sense of something that doesn’t belong to that place, which brings us the uncertainty of permanence and the ephemerality of circumstances. The composition formed by the lit sensors is visible for a few moments, and presents us the traces of an invisible body. That ephemeral condition the word brings to us refers to the work’s praxis and also to the very human condition before technology, particularly to technologies that use electromagnetic radiation.

Biography:
Soraya Braz: Multimedia artist, graduated in fine arts from the School of Communication and Arts of the University of São Paulo, and researcher on the artistic production that uses electromagnetic radiation.

Fabio FON: (Fábio Oliveira Nunes) – Is a multimedia artist and web designer. He has a Ph.D. in arts from ECA-USP, and researches on arts and new technologies, and is master in multimedia from Unicamp. Since 1999, he develops web art projects on the internet. He is the author of the site Web Arte no Brasil and co-organizer of the site Artéria 8.