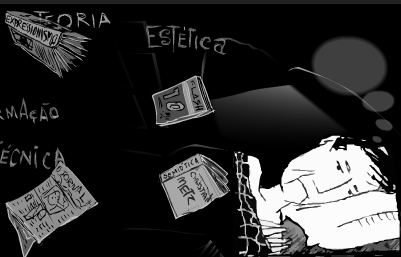 Abstract:
In this history a man is tortured by many night happenings, causing insomnia. He will be awaked by internauts.The rythm of the story is controled in interaction between user, image and mouse. The not-linearity of the events, attributed to the digital medium will depend, in web art, of the randomic calculation, being able to be called “limited”, being mathematician and defined. Each time that to have access the art, the explorer will find a different versions for the insomnia. This variable intends to represent to same the real, where the insomina can be caused by some inherent factors to our control. This make that one unic user enters some times in history and don’t have explored all the combinations.

Biography:
Fernando Rabelo is graduated in Animation Cinema and master in Visual Arts, both coursed at the Escola de Belas Artes at Universidade Federal de Minas Gerais (Fine Arts School at Federal University of Minas Gerais). He started his works illustrating comics and creating storyboards for animations and films, such as Rafael Conde’s “Samba Canção”. His first work as an art director and co-author was the video and short motion picture “O Bloqueio”, awarded at the First Stimulus to Short Motion Picture Prize on the 35mm Finishing category and winner of the Revealment Prize – Best Beginner Director Film at the 4th International TIM Festival of Short Motion Pictures. Following to that, created experimental works such as the animation “Videomagnetofonia”, shown at the Sonar Sound Sao Paulo, and the web-art “Insonia” (“Insomnia”), awarded honourous mention at the Festival du Film de Internet, FIFI 2003 – France, being also selected in numerous festivals of digital art such as Fluxus, File, amognst others in Spain, Cuba and Mexico.