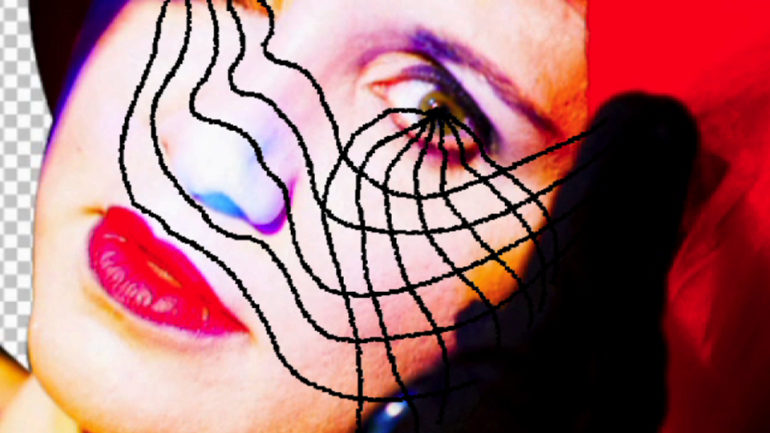 Abstract:
This video on the obsessive manipulation of my own image becomes a metaphor for the general confusion between real and virtual of the “Société du spectacle” prefigured by Guy Debord. I brought the concept within myself, in the heart of my “feminine” self-destructiveness, where the pen of the tablet becomes an “augmented” surgical scalpel deep into the void.

Biography:
Videoartist and live media performer living and working in Rome. She approached the world of contemporary art in 2000, when she met the American conceptual artist Kristin Jones, and began collaborating on the “Tevereterno” (Eternal Tiber) project, creating urban installations for the City of Rome. She currently participates as a videoartist and live media performer in exhibitions in museums and galleries around the world and international festivals such as Magmart, Cologne Off, Fonlad, Berlin Directors Lounge, Videohlica, Contravision Film Fest, WRO New Media Art Biennale, Streaming Festival, File – Electronic Language International Festival, FAD Brasil, Athens Videoart Festival, LPM Live Performers Meeting and many others. In march 2012 she was among the winners of Magmart Videoart Festival with the video “Blood”. She was recently invited to take part to the “Venice International Performance Art Week”, featuring Yoko Ono and Hermann Nitsch among the others (http://www.veniceperformanceart.org). She presently participates as a video-artist, live media performer and body-artist in numerous happenings in art galleries, museums and underground sites, and also takes part in festivals and international events such as the Videoholica (Bulgaria); Experimental Art Festival Biennale Baltica (Russia); LowLives (NY); Cologne Off & New Media Art Festival; Currents Santa Fe’; Moves – Movement on Screen (UK); 700is Videoart Festival (Iceland); Genoa Film Festival; Tribeca Underground; Arcipelago Film Festival; Portobello Film festival (UK); WRO New Media Art Biennale (Poland); Directors Lounge (Berlin); and Contravision Film Festival (Berlin). In 2010 she was one of the winners at the Magmart Videoart Festival (Video Under Volcano), with her CRY ME videoperformance. Also, two of her works won the on-line vote in the Celeste Prize section: “Live Media & Performance”. She also exhibited at the “Invisible Dog” gallery in Brooklyn. During the same year she was selected by the Premio Termoli for her digital painting works; by the Art Shake Festival (exhibiting at the Galleria Mondo Bizzarro and Hybrida Contemporanea, in Rome, and immediately after at the 91mQ Art Project Space in Berlin). She was invited by the Fondazione RomaEuropa to present her work at the Teatro Palladium in Rome, as part of the videoart exhibition, “Cantieri Temps d’Images”. She also directs the “TEN” Performance Art Festival, a marathon of live art whose first edition took place on October 9, 2010 at the Lanificio 159 in Rome. In march 2011, she was at the Nappe dell’Arsenale in Venice as an absolute finalist in the Performance Art section of the Premio Arte Laguna. On April 14th she was in Lisbon as guest of the Anthropology Faculty of the local university, presenting her performance in an academic setting, as part of the “No Performance’s Land?” exhibition. In May she was guest of the WRO Art Center in Poland, for the WRO 2011, the noted Biennale devoted to New Media. In June she