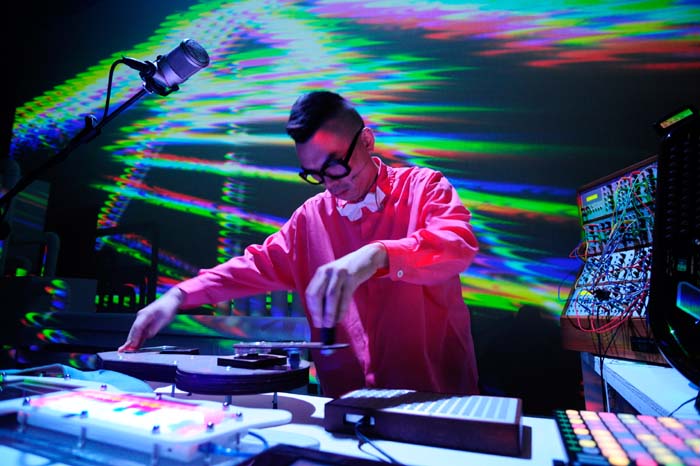 Abstract:
The project is in collaboration with Henry Chu, Adrian Yeung, Thomas Ip, Joseph Chan, XEX GRP, and Hamlet Lin. It started from the fabrication of digital hubs but it turned out to make you feel like having an intimate hug, such is the chemistry coming from the new media performance “Digital Hug”. GayBird and his group of “musical frankensteins” developed a series of unconventional custom-made musical instruments and a responsive sound installation, which are played in complement to interactive video-mapping images and animation. Digital Hug emphasizes “new instruments for new music”, with the aim of bringing a unique and performative live electronic music performance to viewers. In this performance, the musician does not just stand behind his laptop, but also takes up the stage and shows the whole interactive process of playing with such weird instruments. Acknowledgments: The full version of Digital Hug premiered in Hong Kong in June 2011, was presented by the Leisure and Cultural Services Department, HKSAR, and produced by orleanlaiproject. Its Brazilian tour in 2012 is supported by the Arts Development Fund of the Home Affairs Bureau and the Government of the Hong Kong Special Administrative Region. Touring team to HYPERSONICA 2012: GayBird (Concept / Music Composition / Performance); Adrian Yeung (Video Creation & Programming); Orlean Lai (Producer)

Leung Kei-cheuk, aka GayBird, born and educated in Hong Kong. He was professional trained in music composition and electro-acoustic music at the Hong Kong Academy for Performing Arts, and has been active in Hong Kong pop music industry as music director, composer and producer. He is also a core member of PMPS Music, a cutting-edge production unit in blending alternative cultures with contemporary music, and dedicated in expanding vocabularies in the mainstream music industry. He has also participated in music creation for theatre productions. In recent years, he started his own venture in new media art experiment, and trying to infuse it to his music creation and performance. In 2011, GayBird finished his Master of Philosophy at the School of Creative Media of the City University of Hong Kong, specializing his research and creation in human control interface design, new media art and the interactivity of live music performance with application of media technology. In the same year, he collaborated with a few Hong Kong new media artists, and successfully brought up a new media music performance – Digital Hug. The performances have received critical acclaims widely. A new album of the same title was release at the same time. With his broad experience across different spheres, GayBird’s music performance integrates with new media art and technology, combining with custom-made instruments, strong visuals and installation, in order to offer a unique audiovisual experience to audience. Collaborating artists include: Henry Chu – Media artist & designer who has received various awards from local and international design competitions. His recent iPad music apps SoundYeah and Squiggle are selected by Louis Vuitton Digital Discoveries and MoMA New York. Thomas Ip – Working across different forms of media including interactive and visual design, and exploring the new form of perception by integration of media and technology. Adrian Yeung – video artist, who actively collaborates with theatre, dance and music companies and artists in video creation. He has also directed his own theatre productions. Joseph Chan – A toy maker with great enthusiasm in creative electronics, robotics, and software programming. XEX GRP. – a young creative studio founded by Tam Wai-kai and Chris Cheung in 2007, with members actively involve in interactive design, programming and video production. Their works have been shown widely in festivals and events. Hamlet Lin – Interdisciplinary artist who was graduated from Sweden, with special interest in electronics and complex natural system simulation.