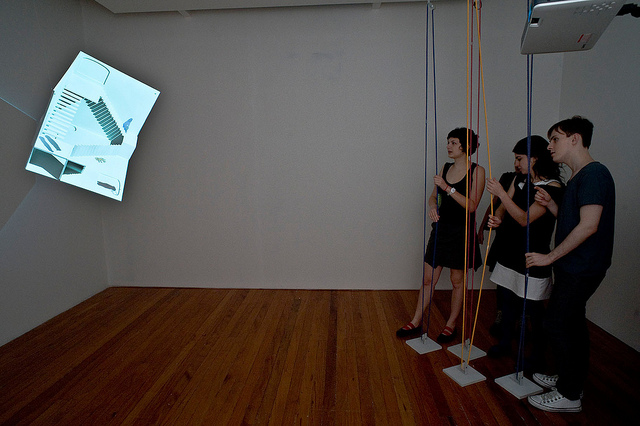 Don’t Give Up! About a history that doesn’t want to be told

Abstract:
“Don’t Give Up! About a history that doesn’t want to be told” is an interactive installation, whose author tried to reach a conflict between the interactor and the very interaction system. The concept was inspired in the work “If a Traveler in a Winter Night”, by Cuban author Italo Calvino, in which the reader is interrupted in his reading in the story’s climaxing moments. In that same direction, the installation is a fun play, a game between the author-model (the narrative itself) and the reader-model (interactor), a metaphor of a story that doesn’t want to be told. In this game, the system was programmed to conduct the narrative to chaos, and the interactor is challenged to organize the available images and sounds into a narrative. Considering the narrative as something that develops in time and space, this installation constitutes a narrative experiment in which one searches a space-temporal relativity. For such, images of four narrative situations are projected on a model. In this model, built according to the spaces Escher has done in his painting “Relativity”, the narrative contents are inter-related and allow the interactor different interpretation layers. Interaction with stories is made through four ropes, one for each narrative situation. The idea is that the interactor, on manipulating the ropes, tries to make understandable the narrative elements available, at the same time that the system was built and programmed to lead them to chaos.

Biography:
Graziele Lautenschlaeger is a brazilian researcher graduated in 2005 in Image and Sound at Federal University of São Carlos (UFSCar). Since 2007, she is inscribed in the Architecture and Urbanism Master´s Program of the University of São Paulo and is a member of Nomads.usp – Center for Interactive Living Studies. From March until September of 2008, she was as master exchange student at the Interface Culture Department in the Kunstuniversität Linz, Austria.