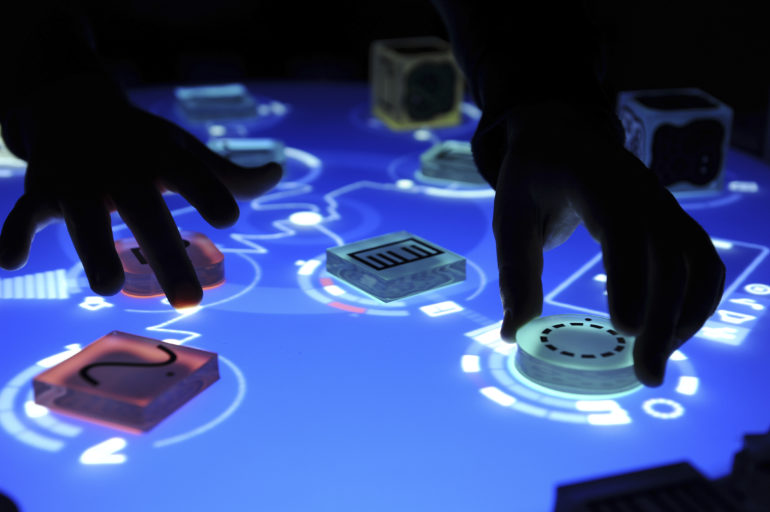 Abstract:
The ReacTable is a collaborative electronic music instrument with a tabletop tangible multi-touch interface. Several simultaneous performers share complete control over the instrument by moving and rotating physical objects on a luminous round table surface. By moving and relating these objects, representing components of a classic modular synthesizer, users can create complex and dynamic sonic topologies, with generators, fi lters and modulators, in a kind of tangible modular synthesizer or graspable fl ow-controlled programming language. The instrument was developed by a team of digital luthiers under the direction of Dr. Sergi Jordà. The “Interactive Sonic Systems” team works in the Music Technology Group within the Audiovisual Institute at the Universitat Pompeu Fabra in Barcelona, Spain. Its main activities concentrate on the design of new musical interfaces, such as tangible musical instruments and musical applications for mobile devices. The reactable intends to be: collaborative: several performers (locally or remotely), intuitive: zero manual, zero instructions, sonically challenging and interesting, earnable and masterable (even for children), suitable for novices (installations) and advanced electronic musicians (concerts). The reactable hardware is based on a translucent, round multi-touch surface. A camera situated beneath the table continuously analyzes the surface, tracking the player’s fi ngertips and the nature, position and orientation of physical objects that are distributed on its surface. These objects represent the components of a classic modular synthesizer. The players interact by moving these objects, changing their distance, orientation and the relation to each other. These actions directly control the topological structure and parameters of the sound synthesizer. A projector, also from underneath the table, draws dynamic animations on its surface, providing a visual feedback of the state, the activity and the main characteristics of the sounds produced by the audio synthesizer.

Biography:
Martin Kaltenbrunner is a researcher who was dropped by surprise into the world of electronic music with the invention of the reacTable, a novel electro-acoustic modular synthesizer with a multi-touch tangible user interface. Together with other members of the reacTable team he has shown and performed this instrument at various international festivals such as Ars Electronica, Transmediale and Sonar. His common research interest lies in the exploration of natural forms of Human Computer Interaction with the design of Tangible, Auditory and Mobile User Interfaces – topics which he has been teaching at various European universities. Currently he is about to finish his Ph.D. at the Music Technology Group in Barcelona, Spain. Music Technology Group Sergi Jordà, Martin Kaltenbrunner, Günter Geiger, Marcos Alonso.