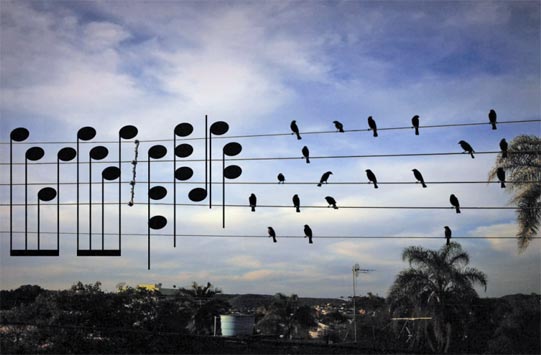 Birds on the Wires

Abstract:
Reading the newspaper one morning, I saw a picture of birds on the electric wires. I cut out the photo and decided to make a song, using the exact location of the birds as notes. I was just curious to hear what melody the birds were creating. This work was made over the original photo, un-retouched, published in one the biggest Brazilian newspapers, “O Estado de São Paulo” on 27/aug/2009, and shot by Paulo Pinto (note: I just erased the birds for effect at the end, but didn’t change their positions at all). I’ve made this short video to demonstrate my interpretation of the birds as notes. Music made with Logic. Video made with After Effects. Wires was a winner of the Youtube Play Guggenheim, selected among more the 23.000 entries.

Biography:
Jarbas Agnelli is a brazilian artist that uses film, photograph, illustration and music to communicate his ideas. He founded AD Studio, a production house in São Paulo, to realize his projects of advertising, music videos, motion design, shorts movies and soundtracks. In 8 years ahead of the studio he directed more than 250 commercials, most of then with special effects and alternative filming technics. He begun his career in the 80’s as an illustrator and soon become an art director, working in major brazilian agencies. His works as a creative granted him several national and international awards, like Cannes Lions and Clios. In 2001 he won a Grand Clio for his spot “The Week”. Agnelli was always close to technology, and his development as a film maker happened in parallel to the development of digital medias and computer processing. At some point in his art director career he was producing entire digital commercials and soundtracks alone at his home. He decided to open AD Studio with a bunch of friends, after grabbing several brazilian MTV awards with pioneering full CG music videos. Jarbas was also a member of the electronic band AD, with an acclaimed album released by Trama Records, and now has a pop project with his older son Gabriel Agnelli, under the name Vertikkal.