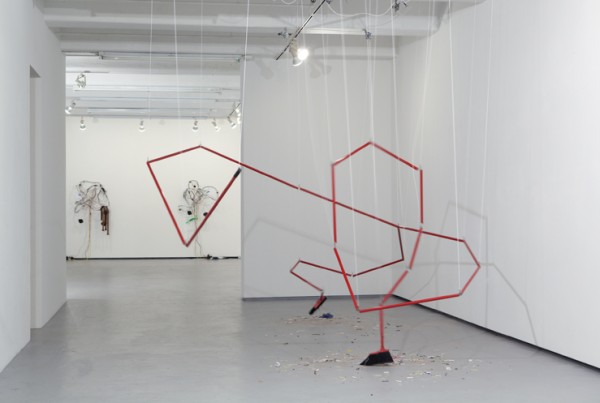 Abstract:
“Sweeping Spirals” is part of series of suspended installations in which geometric forms (instants angulaires) break up and reassemble in an unpredictable manner. The work is also related to a set of works the artist created around the theme of house cleaning (Remue-ménage and La pause-café du concierge, for example). In “Sweeping Spirals”, two brooms situated on the opposite ends of a set of interconnected broomsticks take on the shape of a long spiral. Each spiral segment seems to act on its own and the perfect form is only rarely reestablished. In fact, motors pull strings attached to the joints between the segments, creating jerky movements that manipulate them like a big marionette. Moreover, now and then the brooms rub against the floor and push a bit of debris without ever really collecting it. At once tragic and comic, this spiral, which is endlessly disassembling itself and never properly carrying out the task, seems to be engaged in an awkward dance under the viewer’s complicit watch. Involved in an obsessive and inefficient activity that seeks to be useful but fails miserably, the piece nevertheless does function, in terms of its own logic.

Biography:
Montreal artist Jean-Pierre Gauthier, who has been active on the contemporary art scene since the mid-1990s, has a hybrid practice that incorporates visual arts and audio exploration. He was the winner of the prestigious Sobey Art Award in 2004 and recipient of the Victor Martyn Lynch-Staunton Award in 2006. He has exhibited his audio and kinetic installations across Canada, in Europe, Asia and North America. Notable among his group exhibitions are Montreal’s Biennale 2000, Electrohype 2006 in Lunds Konsthall, Transmediale.06 – Smile Machines at Akademie der Künste, Berlin (2006), Tonspur_expanded in Vienna, Austria (2010). A retrospective of his work entitled Jean-Pierre Gauthier: Machines at Play was organised by the Musée d’art contemporain de Montréal and was shown in five Canadian Museums and at the Akron Art Museum (Ohio,USA). The artist is represented by Jack Shainman Gallery in New York. His last solo exhibition in New York was considered by the Village Voice as one of the best shows of 2011.