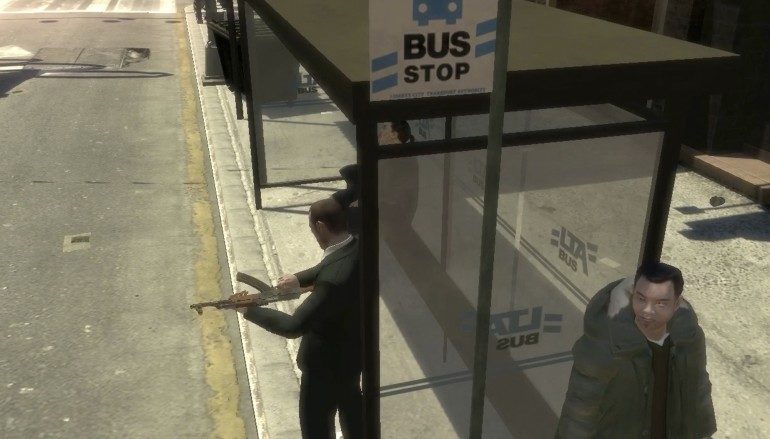 Abstract:
READY FOR ACTION is a series of scenes featuring video game characters at the mercy of public transportation. Audio from each game has been blended with audio captured by the artist while waiting for analogous public transportation in the real world. The games used in this series provide the player with the ability to act upon a simulated world in ways that are not possible or practical in our own. The player is always capable of pushing the action forward, unhindered by delays that are commonplace in everyday reality. The player’s avatar is always armed to the teeth and prepared to act. Constructs like subways and buses often exist in-game, but only as set pieces; players are above the need for such pedestrian services. With each scene in READY FOR ACTION, the surreal inertia of the game’s world is interrupted by a moment of inaction and powerlessness that would be commonplace in our own world, but seems alien when experienced by a gun-toting game avatar. The player has chosen to give up this birthright of control and be manipulated by external forces.

Biography:
Kent Sheely is a new media artist based in New York City. His work draws both inspiration and foundation from the aesthetics and culture of video games, examining the relationships between the real world and virtual ones. Much of his work centers around the translation and transmediation of symbols, concepts, and expectations from game space to the real world and vice-versa, forming new bridges between simulation and reality.