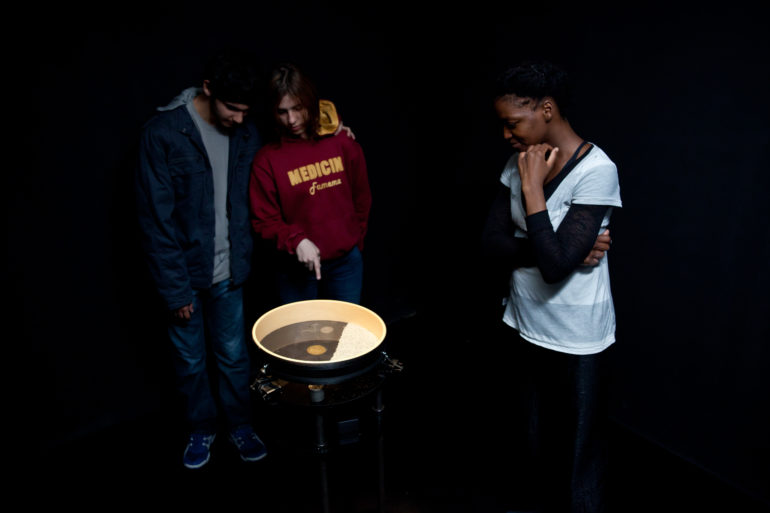 Abstract:
“Coronado” was inspired by a visit to the Coronado beach in California, which was an awe inspiring moment never experienced in other beaches. The soundscape present in Coronado seemed to be coming from all directions with layers and layers of sound waves. I decided then that I would make a sound work to translate this experience. The sound installation is characterized by the interplay of the analog and digital sound sources which layers over one another, exploring the idea of a seascape. The center of the installation is an ocean drum controlled with mechanical arms that creates and simulates the sound of sea waves. This is picked up by the microphone, reprocessed through the computer and sent out to the 6 channel surround speakers in different time. The interplay and sense of endlessness in the layering the analog and digital are my interpretation and response to the wonderment I found in Coronado.

Bin is a new media artist currently based in Los Angeles. He received a BA from Lasalle College of the Arts in Singapore, majoring in the Interactive Arts program. After graduation, he worked as a freelance designer, research assistant and teaching as a part time lecturer. Bin enjoys working across different media and formats, particularly in the audiovisual field. His interest in sound stems from its abstract yet powerful affective qualities. Of equal interest to him and one of his ongoing researches is our relationship to nature, specifically how humans adapt or perceive the change in environment. Currently he is working towards his MFA in UCLA’s Design | Media Arts program where he is hoping to take his exploration further. Bin has received various awards such as the Japan Media Arts Jury Recommendation 2009, Crowbar Awards, and Aniwow! China. He also exhibited and performed at Singapore M1 Fringe Festival; Japan Media Arts Festival; Substation Sound Art Open Call and the New Contemporaries in Singapore. Kian-Peng’s work has been published recently in “See yourself sensing: Redefining Human Perception – Madeline Schwartzman”.