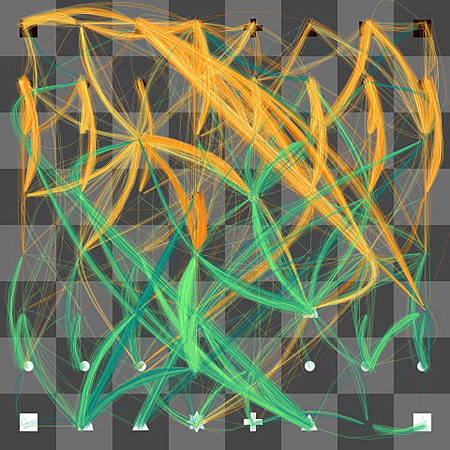 Abstract:
Thinking Machine 7 is a new version of Thinking Machine 4 and explores the invisible, elusive nature of thought. Play chess against a transparent intelligence, its evolving thought process visible on the board before you. The artwork is an artificial intelligence program, ready to play chess with the viewer. If the viewer confronts the program, the computer\’s thought process is sketched on screen as it plays. A map is created from the traces of literally thousands of possible futures as the program tries to decide its best move. Those traces become a key to the invisible lines of force in the game as well as a window into the spirit of a thinking machine.

Biography:
The two of us have been collaborating on various art projects since 1997. We have come up with more projects than we care to remember and occasionally, when the funding comes through, we even create them. Marek Walczak is an artist and architect who is interested in how people participate in phsycial and virtual spaces. This has led to digital tools and interactive projects such as Apartment which was shown at the Whitney Museum and many venues worldwide. Dialog Table has recently been completed for the Walker Art Center, it is a shared interface that replaces a keyboard and mouse with gesture recognition technology. Current projects bridge physical installations with user interaction, including a one block long façade at 7 World Trade Center that reacts to pedestrians walking beneath it (for James Carpenter Design) and video installations that activate physical space based on user engagement such as Third Person, recently shown at the ICA, London. Marek trained as an architect at the Architectural Assoc. in London and Cooper Union in New York. Martin Wattenberg’s work centers on the theme of making the invisible visible. Past projects include The Shape of Song, Third Person, the Whitney Artport’s Idea Line, and Apartment. Wattenberg is a researcher at IBM, where he creates new forms of data visualization. He is also known for the SmartMoney.com Map of the Market. He holds a Ph.D. in mathematics from U.C. Berkeley.