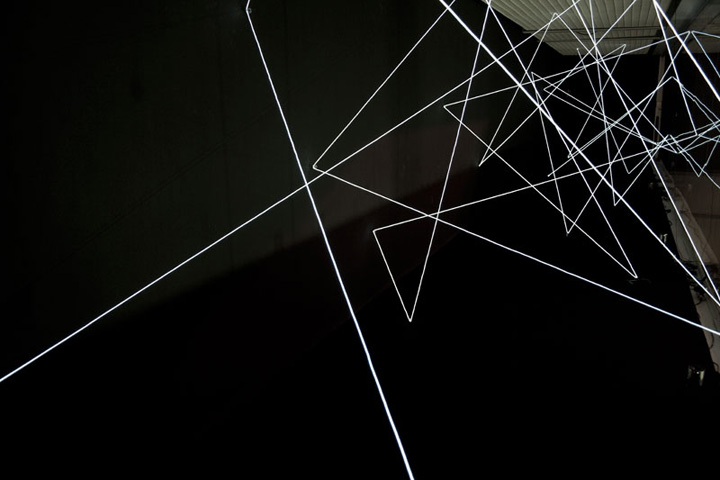 Abstract:
The installation “capacitive body” is a modular light system that reacts to the sound of its environment. Each custom-built module consists of an electro-luminescent light wire linked to a piezoelectric sensor and a microcontroller. Through its modular setup it can easily be adapted to various urban spaces. The sensors are used to measure vibrations of architectural solids in a range of low frequencies. These oscillations are triggered by surrounding ambient noise, for example traffic noise. The data sensor controls the light wires, which are tensed to a spatial net structure. According to the values of the measurement, light flashes are generated. With increasing vibrations the time between flashes becomes shorter and shorter. The stability of this nervous system gets to an end where it collapses and restarts again. A dynamic light space is thereby created, which creates a visual feedback of the aural activity around the installation.

Biography:
In 2002 Martin Hesselmeier received a Diploma in Communication Design from the Fachhochschule Mannheim, academy of arts and design Mannheim and in 2007 a Diploma in Audio-Visual Media at the Academy of Media Arts Cologne as a postraduate student and has since been working for the European Union Research Project “Citizen Media” as a designer. He is also working for various design studios in Germany. In 2004 Andreas Muxel received a Diploma in Media Communication Design from the University of Applied Sciences Vorarlberg, Austria. Between 2004 and 2007 he works as an interaction and interface designer for the MARS-Exploratory Media Lab at the Fraunhofer Institute for Media Communication. In 2008 he finished his postgraduate studies at the Academy of Media Arts Cologne. In his works he is interested in the mixture of digital code and physical material and the man-machine interface. He lives and works in Cologne, Germany.