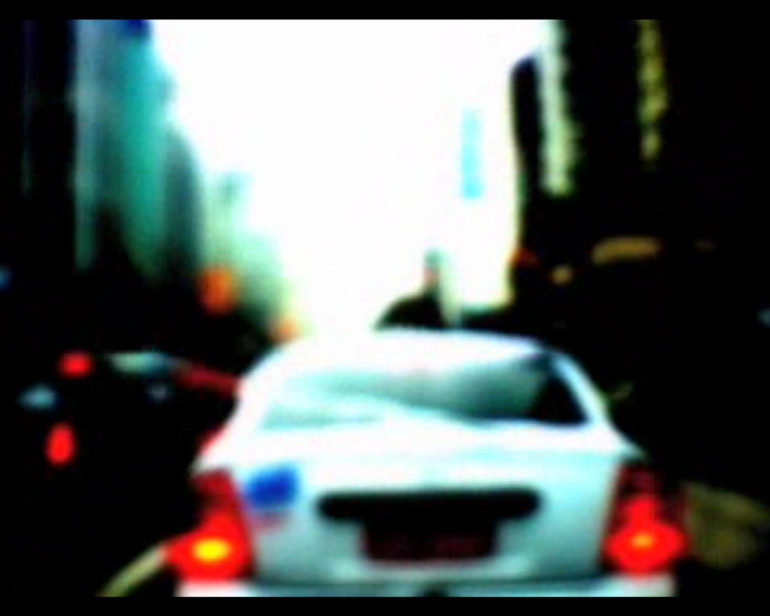 Abstract:
“Transfers” is a project exploring real-time generation of art and user participation in a mobile environment. “Transfers” allows a passenger of a taxi to generate a unique piece of art by giving the taxi driver directions. As the taxi moves through the city the passenger experiences a real-time manipulation of live exterior video and audio taken from a camera and microphone mounted in and outside the taxi. The taxi is also equipped with a GPS that feeds an onboard computer data such as speed, direction, longitude and latitude. This computer is running custom audio/video manipulation software that uses the GPS data to make decisions about how the live video/audio feed is manipulated and then seen and heard by the passenger. The manipulations of the live feed is displayed on two LCD screens and heard through the cars stereo system. As the user tells the driver where to go the passenger becomes both performer and viewer as they experience a unique piece of art generated by their decisions. The software also records this performance and at the end of the drive the passenger receives a CD with a QuickTime movie file of his or her recorded performance. Technical needs: (GPS, Macintosh Laptop G4, Digital Video Camera, Microphone, 2 LCD Screens, Taxi) I can supply all equipment needed except for the taxi or rented car and gas. The ideal situation for this piece is to find a taxi driver willing to volunteer his or her services for the performance. If this cannot be found a rental car can be used that is the same make and model as standard taxis in the region. I will also require a driver who is familiar with the area and the local traffic laws.

Biography:
Matt Roberts (USA) is a new media artist specializing in real-time video performance and new media applications. His work has been featured internationally and nationally, including shows in Taiwan, Brazil, Canada, Argentina, Italy, Mexico and in New York, San Francisco, Miami, and Chicago. He has shown in several new media festivals, including ISEA, FILE, 404, CONFLUX, and recently received the Transitio award from the Transitio_MX Festival in Mexico City. He is the founder of MPG: Mobile Performance Group, and an Associate Professor of Digital Art at Stetson University.