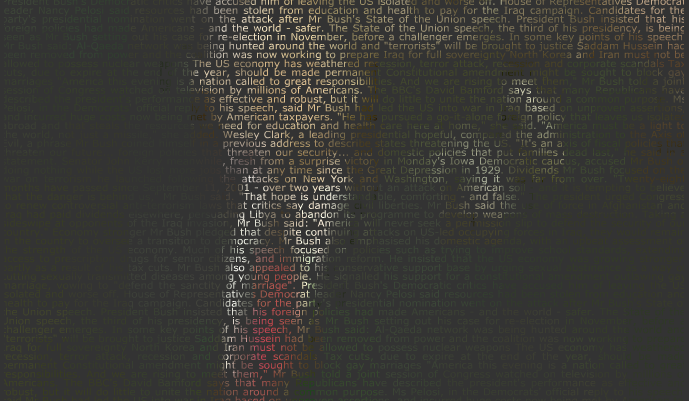 Abstract:
Michael Takeo Magruder’s “event”, in which headline news articles have been parsed from http://news.bbc.co.uk/ between December 29 and February 1, is concerned with the individual’s relationship with finite moments in recent history. As with his earlier works, Magruder grapples with media saturation and its subsequent devaluation of information; copyright-who actually owns the information, the event that triggered it, the history it becomes?; is it the “truth”? “event” re-presents 31 news items, compelling the user to “reflect upon the minute isolated occurrences of which history in an empirical sense is composed”. Magruder does this by extracting, slowing down, and meticulously crafting samples of audio, image, text, and video information. Rather than disguise or remove distortions, Magruder deliberately incorporates the artifacts of data compression into the piece. Events that usually stream towards us in a rapid, undifferentiated flow become moments of qu iet contemplation that can be viewed and re-viewed in one’s own time. The user can apply an array of colored filters, like gels used on theater sets?one can, in fact, choose to view events “through rose-tinted glasses”. Depending on the color, the moving image either partially obscures or reveals the “truth”, i.e. word. One can choose to literally tone down the rhetoric, or inflame the masses. One filter filters out the others. Multicolored, Magruder’s default, represents ambiguity, multiple viewpoints, the many. With the motion slowed, and much of the detail removed from the images, one can begin to see what news actually “looks” like. We see the outlines and the spaces in-between. We study the news as we would study a painting. Magruder’s “event” is his most powerful and beautiful yet. (Turbulence.org Press release)