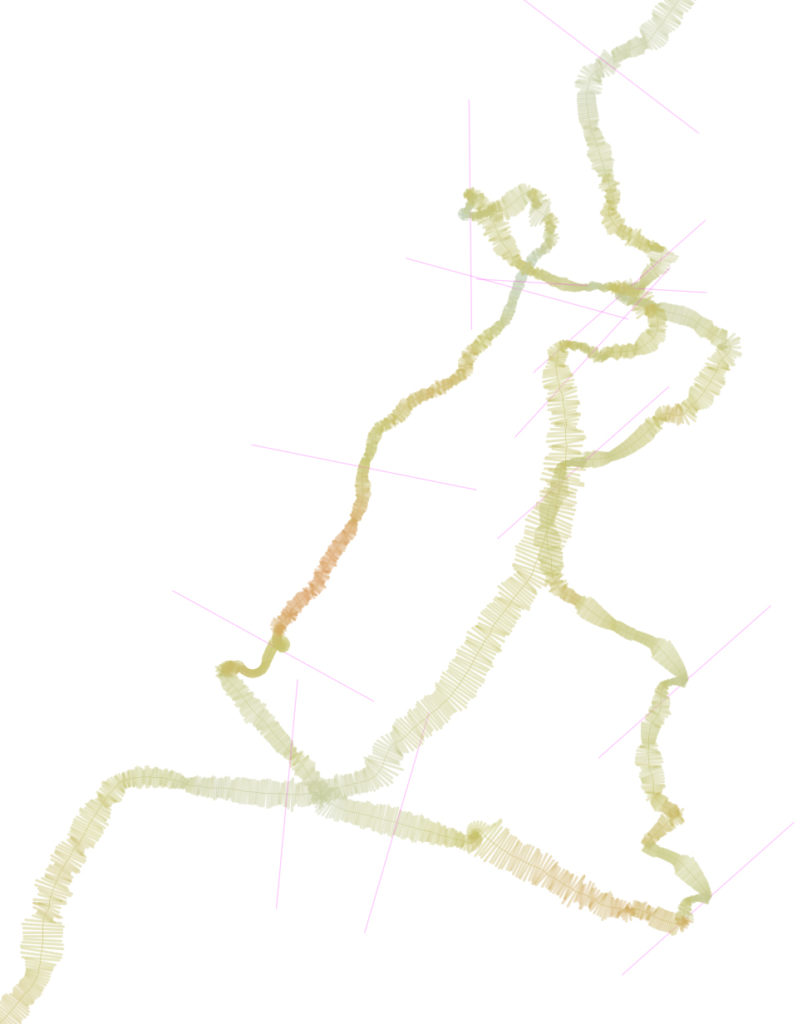 Abstract:
The weather is a strong part of Helsini culture, blusteringly allowing or rerouting inhabitants lives. The weather is a very strong and temperamental character. One feels it. But what, one wonders, might this character look like? Could it assume visual form? This work attempts to use the weather as a creative partner. I’ve lent the wind a pen, letting it sign a week’s worth of its temperament, character, visually. In its minute long, the work shows the Helsinki wind’s journeyings and farings during a week in early September 2007. The two lines, light and dark, slow and quick, tell the same tale, albeit differently interpreted. The light grey line is my answer to what kind of line the wind would draw, if it could draw. Via wind sensor measurements and my own software, I gave the wind a pen, letting it draw. The wind movements are based on wind direction and wind speed measurements, of a central-Helsinki based weather sensor belonging to the Finnish Meteorological Institute. The light grey line is directed by the winds movements and speed. When the wind blows West the line moves West, when the wind blows North the line moves North, and so on for all compass directions. When the wind blow stronger, the line moves faster, when the wind’s slow, so is the line. In total, the light grey line is the wind’s drawing of a week’s worth of its different blowings. The darker grey, and more dominating line, is a close-up of the ‘tip’ of the light grey line most recently drawn point of the wind. In greater detail, the darker grey line shows the actual and delicate movements – the drawing, that is, and character too – of the wind. The line’s width reflects the wind strength. Together, the two lines catch and describe the week’s wind overall farings and its minute blustery temperamentality. Personal background for the work A good friend stayed in Helsinki for six months. I wanted to make some sort of commemorative documentation of the stay. The strong Helsinki weather, with the wind as chosen representative, is the commemoration’s main character and soul. This work is a commemoration of the first week. Another 25 weeks will follow later.

Biography:
Miska Knapek is an artist designer, with a past in Graphic Information Design (BA) and graduate studies in artistic interaction design, currently based in Helsinki, FInland. He explores chaotic patterns and challenging fundamental perceptions of society, optics, time, and space. Applying information visualisation techniques, to photographic/sensory/ datamined material, Knapek’s work traces the hidden lives of nature, society and people’s immediate personal surrounds. His work has been exhibited internationally, including at Ars Electronica and Transmediale.