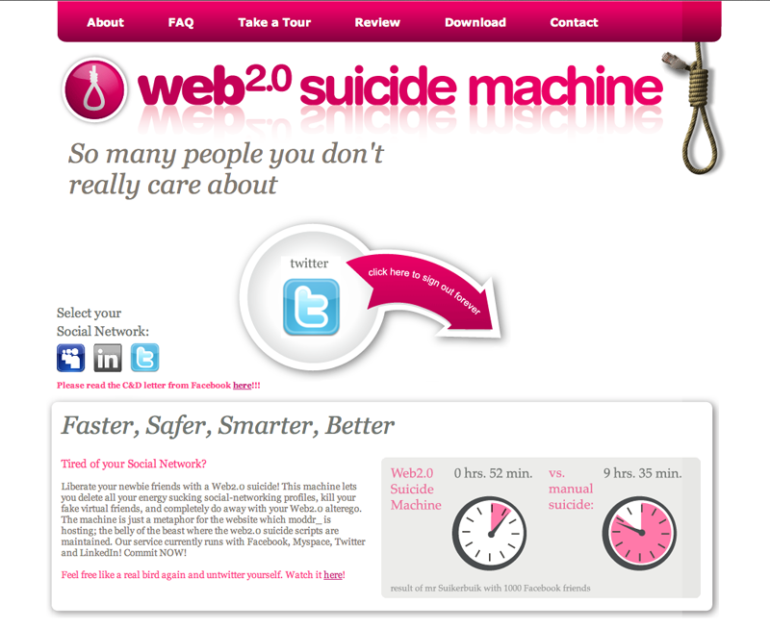 Abstract:
Liberate your newbie friends with a Web2.0 suicide! This machine lets you delete all your energy sucking social-networking profiles, kill your fake virtual friends, and completely do away with your Web2.0 alterego. The machine is just a metaphor for the website which moddr_ is hosting; the belly of the beast where the web2.0 suicide scripts are maintained. Our service currently runs with Facebook, Myspace, Twitter and LinkedIn! Commit NOW! The machine consists of a tweaked Linux server running apache2 with python modules installed. Selenium RC Control is used to automatically launch and kill browser sessions. This all driven by a single python/cgi script with some additional self-written python libraries. Each user can watch her suicide action in real-time via a VNC remote desktop session, displayed on our website via an flash applet rendered live into the client’s webbrowser. We are also running some customized bash scripts plus MySQL in the background for logging and debugging, jquery/PHP for the website and a modified version of the great FlashlightVNC application built in Flex. Web2.0 Suicide Machine consists of roughly 2500 lines of self-written code. “Now you can scrub yourself from the Internet with Web 2.0 Suicide Machine, a nifty service that purges your online presence from these all-consuming social networks.” TIME Magazine, January 2010

Biography:
moddr_ came about in 2007 when a group of alumni from the Media Design MA course, at the Piet Zwart Institute in Rotterdam. The name ‘moddr_’ resembles the dutch word ‘modder’, meaning mud, and we chose this name to show that a large part of our practice involves the modification (modding) and re-creation of already existing technology. We tend to dislike the idea of contemporary media being labeled ‘new’, and it is part of our mission to display a critical perspective on issues related to this through our artistic practice.