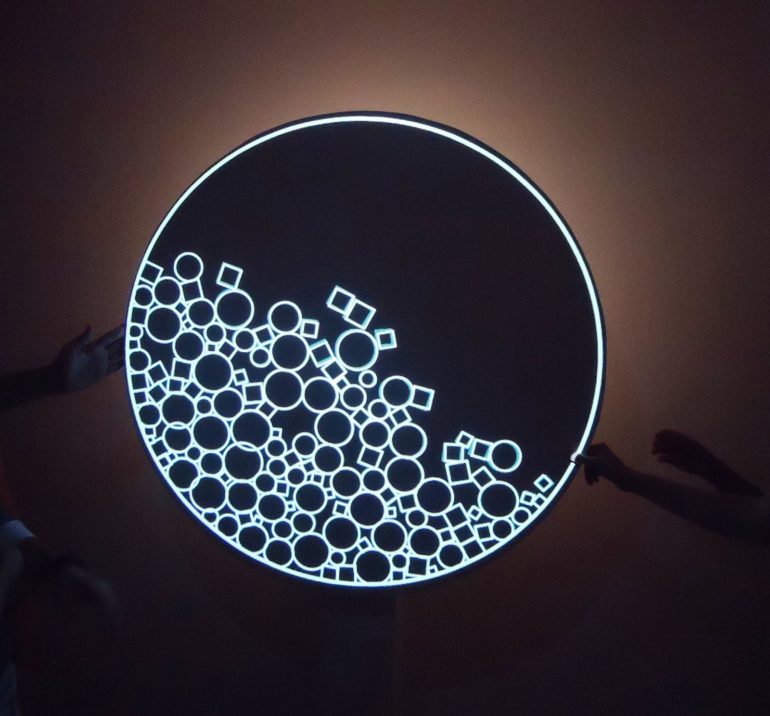 Abstract:
In this piece, we wanted to create a physically tangible, interactive, digital object. We focused our attention on the physical act of spinning or tumbling an object. We wondered what would be the implications of the computer knowing the exact rotation, position and velocity of a spinning object. If the computer is aware of the position and motion of its projection screen/object in real-time, then the object can be accurately projection mapped onto as it spins. We set out to create a DIY optical rotary encoder (seen in the video). This optical encoder is comprised of a pattern of black and white strips printed radially which carry a digital encoding of the rotation angle. We used an 8 bit pattern, which allows for a resolution of 256 points per revolution of the wheel. This optical pattern is read using a standard webcam and interpreted using custom software. This allows us to read the position of the wheel using no moving parts. In creating the wheel itself, we use a special bearing mechanism that moves with very little friction, allowing the wheel to spin freely and very smoothly for long periods of time. Finally we project onto the wheel a physical simulation of simple objects “tumbling” inside the wheel. When an object collides with another object, we trigger the synthesized sound of this collision. The resulting system is quite simple at first glance. But upon interacting with it, and spinning the wheel, it comes to life. The physics feel right, and match the motion of the wheel. Gravity seems natural and honest. And the sounds seem to give the basic shapes a sense of solidity and resonance. The piece tends to attract people and can become hypnotic.

Biography:
Muharrem Yildirim is a computer science graduate who concentrates on enhancing the interaction between human and machine, instead of developing more complex systems which people cannot even use effectively. His focus is bringing technology closer to people by designing interactions. He creates interactive works which make users experience new kinds of experimental and hopefully more natural interactions. He graduated at the Department of Computer Science from Istanbul Bilgi University, Turkey, where he still continues his master’s degree in Visual Communication Design (MFA). In parallel, he is also pursuing his PhD in Media Arts and Sciences in the School of Art, Media & Engineering at Arizona State University as a Fulbright fellow. In 2008 he spent six months in Aarhus University, Denmark, and studied in The Centre for Advanced Visualization and Interaction (CAVI). David Tinapple is an artist and engineer who creates his own tools to capture and explore images, video, sound, and human interaction. He also creates automated systems that collect and analyze media, real-time performance tools, interactive video environments, and image capture devices. His aim is to illuminate the forces at work around us and within us, explore our assumptions about the world, and reveal surprises about everyday life. He completed a master’s degree in Fine Art at Carnegie Mellon University and is currently an assistant professor in the School of Arts, Media and Engineering at Arizona State University.