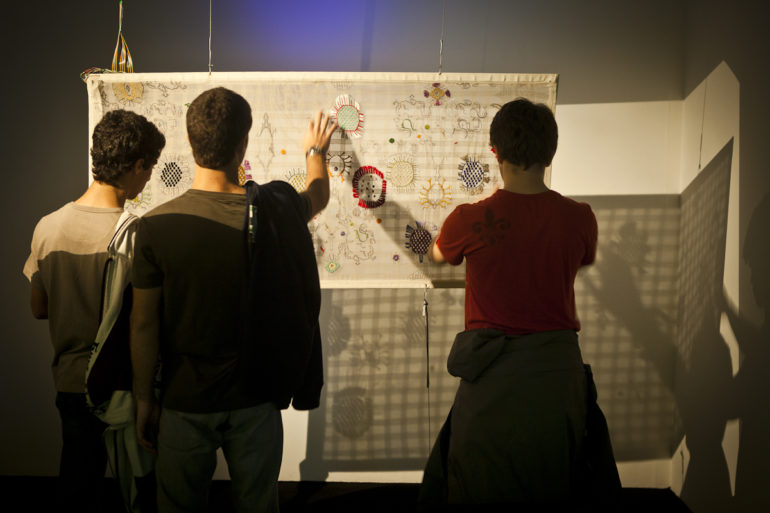 Abstract:
“Strings” is an immersive installation that deals with issues across the fields of craft, textile technologies, sonic art and responsive design. It investigates bi-directional relations within everyday surroundings, focusing on the relationships between space, texture, and bodily expression, attempting to exploit them through a combination of innovative soft technologies and traditional art practices such as weaving, printmaking and embroidery. The artwork focuses on the development of a textile system that enables people to experience an immersive physical environment by using analogies of the human skin and nervous system. More specifically, the somatosensory system (outer skin, nervous system, brain) is being examined in the context of a responsive artwork, and is translated into a design system (haptic qualities, textile structure, programming). The physical interface is constructed from cotton micro-tulle and a number of conductive threads connected to an Arduino microcontroller, and is layered with a translucent silk organza that has been digitally printed and hand-embroidered with a variety of stitches and materials. This results in a highly haptic and textured surface, with the conductive threads acting as nerves and the processed organza acting as skin. In this way, “Strings” simulates a living textile organism that responds to people’s bodily engagement in a tangible, tactile manner. People’s gestural engagements with the textile, interpreted as a series of touched cross-sections of conductive thread, are passed to the “Strings” software to generate sound according to the performed gestures. As the textile is touched, stroked, and pressed, “Strings” encodes these gestures on different spatial and temporal scales, continuously generating sonic output that ranges from short, staccato bursts to expansive, harmonic sound fields based on people’s interaction.

Biography:
Myrto’s practice as an architect and artist transgresses the boundaries of art, spatial design, responsive design and e-textiles, exploring concepts of spatiality, narrativity, hapticity and bodily engagement. Jeremy’s practice involves the independent production of music in live and recorded contexts, utilizing methods of live sampling, instrumental electronics, fixed media and interactive performance. Their work has been exhibited at various festivals and venues around the world.