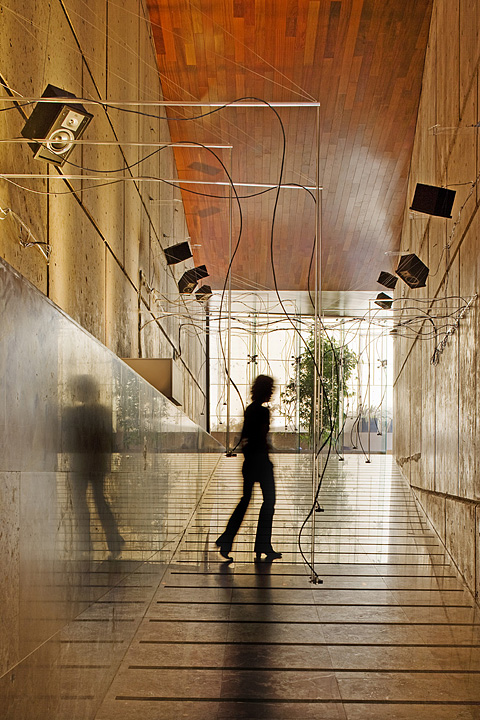 Abstract:
“Between Bodies” connects visitors’ actions to bodily energies circulating throughout Tijuana, making visceral our links to the vast network of human agency at work in the city. Products assembled at great human cost in Tijuana are sold worldwide, yet media hype would suggest our only connection to the city is through fear. We ingest media’s relentless feed of drug-related crimes; deliciously terrified, most stay away from the city, effecting a growing blockade. This lack of full representation of Tijuana’s civic life also short-circuits any social actions a richer portrayal might engender. The damaging cycle of media-fueled isolation is not unique to Tijuana. If we are living in an attention economy, visitors’ movements in “Between Bodies” trigger sonic advertisements for the civic energy animating Tijuana. But these advertisements require you to supply your bodily energy to the exchange. The installation samples everyday work and play sound-gestures, recorded throughout the city. These sound-gestures are triggered and changed by visitors’ natural movements through the piece. Pitch, speed, volume and layering of sounds are modulated in real time, in relation to a visitor’s actions and proximity to sensors hung in a space. The visitor’s body becomes a tuning instrument, a transducer of others’ bodily energies. Ideally this transduction is not a one-way street. To explore the sound of another’s body requires one to listen to its rhythms, to internalize them in some way. A bodily understanding is hoped for. Research is showing gesture to be a key contributor to the formation of language and abstraction. Does performing a new gesture generate new logics? How is our understanding of the world changing as smaller gestures are used to encounter larger terrain? In “Between Bodies”, visitors’ gestures are tracked in order to connect them to life in Tijuana, highlighting everyday acts that add up to a huge source of inventive energy. The installation gathers traces of this energy in one space, where it can be felt as a common source of power, putting Tijuana’s agency in dialog with that of the visitor. Surveillance technology is appropriated for interests that run counter to the intentions of those typically tracking the border – here sensors allow visitors, through acts of bodily transduction, to perceive the lives of Tijuanenses in a richer way.

Biography:
Nina Waisman’s work considers technologically driven forms of control and communication, provoked by technology’s in-forming of the body’s space, time, and movements. Her production ranges from interactive sound-and-sculpture installations to object-making, with projects shown at venues such as the CECUT in Tijuana, the House of World Cultures in Berlin, the San Diego Museum of Art, UCSD, UCLA, LACE and Telic in Los Angeles. Marius Schebella is a researcher and technical developer of interactive media. He has collaborated with companies and artists in Europe, Canada and the USA.