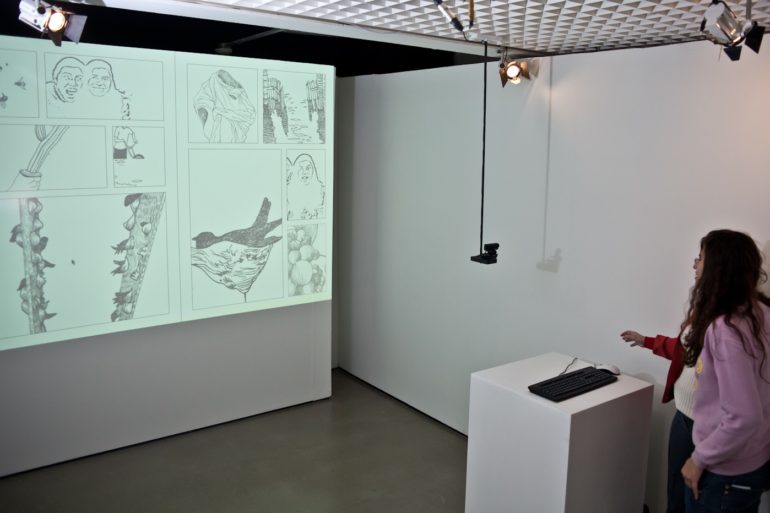 Abstract:
“Ideogenetic Machine” is an interactive installation that incorporates portraits of participants into an algorithmically generated comic book. A camera captures the portrait live while an algorithm transforms the photographic image into a “line drawing”. Face detection is utilized to insert-code generated blank speech bubbles into the narrative. The software creates never repeating compositions using a set of rules that approximate the compositional decisions made by a human comic book author. The comic is projected live, and consists of the algorithmically processed portraits as well as randomly chosen story elements from a database of drawings. The story elements are drawn by the artist, mostly illustrating speculative narratives based on current news and events. A participant can email him or herself the finished comic as a PDF file. Participants are free to fill the blank speech bubbles with their own invented dialog at home. Inspired by experimental narrative forms that uses chance to aid the process of composition such as the cut-up technique and Soviet montage theory, the project aims to generate unexpected narrative possibilities through the juxtaposition of different images and unpredictable actions by the audience. In this project, computer code enables endless collaborations between the artist, the audience and the operation of chance. The success of “Ideogenetic Machine” is dependent upon the creative contribution of the audience. They are encouraged to perform in front of the camera, as well as completing the narrative by filling out the blank speech bubbles.The installation encourages the audience to cross the boundaries between fiction and non-fiction, production and play.

Biography:
Nova Jiang was born in Dalian, China, in 1985 and is currently based in New York. She holds a MFA from the Design Media Art Department, University of California, Los Angeles. She is the recipient of an Eyebeam Fellowship, a Skowhegan Fellowship, a Black Rock Arts Foundation Grant, a Sculpture Space Grant and a Wave Hill Van Lier Visual Artist Fellowship. She has exhibited at Sundance, 01SJ Biennial, MediaLab-Prado, Sonar, Glow, TEDActive, Japan Media Arts Festival, Milan Public Design Festival, Eyebeam and Transitio_MX.