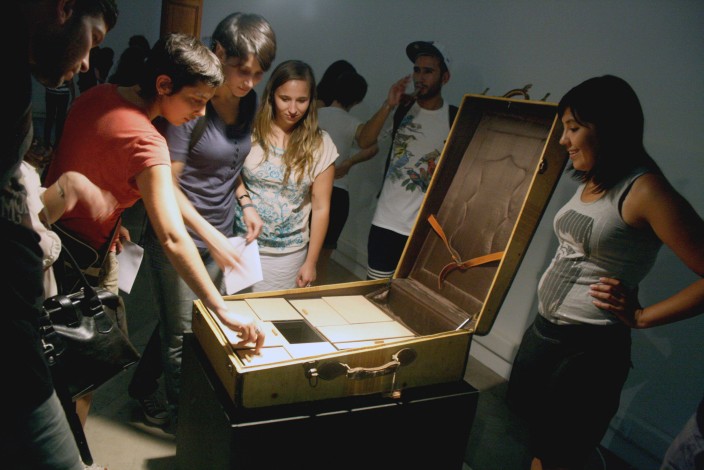 Abstract:
According to Walter Benjamin,memory always breaks down into images and not words. Memory is loaded by a large nonverbal registry which is usually not mentioned when we conceptualize our experiences. However, the visual does not fill these discursive gap completely. There is also an ample auditive contribution to the process of remembering something. The work Untitled wants to bring to mind this something. The device is an interactive sound installation, an object loaded with history: an old suitcase with 5 drawers which contain different objects and travel references, memories, collections and documents. By opening each of these sliding gates, sounds can be activated and modified, depending on the number of times each of the drawers is opened and closed or how open or how closed the drawers remain. Each sliding gate contains a photo-resistance that captures light once the drawer is opened. This information modifies the sound parameters such as intensity, frequency and randomness of the audio playback. The recorded sounds consist of noise and stories of different persons. Thus, through the manipulation of the sliding doors of the suitcase the visitors can create their own soundscapes. This mechanism mixes the use of technology with the poetics of recombining sound elements and allows to play with sound memory of ones own experiences. What kind of memories causes the encounter between discursive, auditory and physical objects? This question is posed as an invitation to the visitors. They are invited to re-read and to go on a personal journey departing from their own memories.

Biography:
A Chilean-Mexican stage designer, lighting designer and visual artist. Graduated in stage design from the Escuela Nacional de Arte Teatral of the Mexican Centro Nacional de las Artes (2000-2004). She has collaborated in various art projects, disciplines and formats. In Mexico, she has participated in stage shows as a set designer and in film shootings (arts and costumes). She has also participated as a lighting designer in theater, dance and installations in collaboration with Vivian Cruz, Alain Kerriou, Hugo Heredia, Jacqueline Serafin, the electroacoustic music group MU, José Luis Garcia Nava, Cuauhtémoc Sentíes, Esthel Vogrig, among others. Since 2004, her theatrical work has focused on the design of image projections as stage design for important productions such as: Defensa antes sobrevivientes, loosely based on the book Invención de Morel by Adolfo Bioy Casares, Cuadrilátero 2 de 3 caídas by Gabriel Arteaga, Impresiones en el ánimo directed by Gerardo Trejoluna, the Tribute to Cri Cri conducted by the National Dance Company at the Palacio de Bellas Artes, and En la noche cuando no sueño… directed by Alicia Sanchez. She was also selected for the Mexican Production and Investigation Grant for Arts and Media in 2008 from Centro Multimedia to create and stage the interactive and interdisciplinary play Antropía- Interferencias escénicas del cuerpo-imagen. In Chile she has collaborated with Ana Carvajal in the lighting design for the dance theater productions Desierto de mediodía and Creo Falso. She is co-author of the play V de Vertigo, a multimedia circus art performance first staged in 2010. In 2011, she founded the company Ruido Blanco (http://cartografiasdanza.wordpress.com/) that integrates the fields of stage design, dance, theater and technology. Cartografías is the latest project of Ruido Blanco, one of the winners of the national call Conexión Danza, created in co-direction with Germán Henríquez and the choreographer Karin Costa. In 2012 she presented the interactive installation Untitled in the 10th Biennial of Video and Media Art at the Museum of Contemporary Art in Santiago.