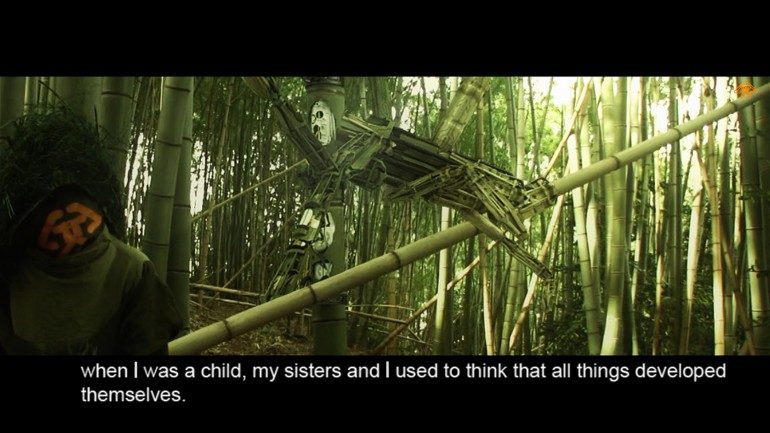 a Forest within a Forest

Abstract:
A guide named Nashi narrates the audience journey in an uncanny forest. What are the creatures that live there, living beings or robots? Nashi states that everything is animated, and that even the things we consider synthetic and artificial are as sacred as plants and stones. She criticizes nature for its inability to develop and praises technology for its flexibility and proclaims that nature should adapt to technology in order to survive. AUJIK are an new age group that shares Shintos belief that everything of nature is animated, even the things that we consider the most artificial and synthetic. Just as with other forms of animism, AUJIK worships everything that comes out of nature and regard it as spiritual beings, the main difference with AUJIK is that science and technology is considered as sacred as stones and trees. Melvin Lavell writes in his books Esoteric Perception of Artificial Intelligence and Ghost in the machine of sticks and stones that all sort of communicative technology since the first radio waves posses something metaphysical and spiritual and when it will reach a more sophisticated form more people will discover it and then it will reach a religious status. The Shinto priest Hideaki spoke about similar things in the 1800:th century after he had seen a Karakuri doll( a clockwork robot made of wood) and claimed that in the future we will create mechanical characters that will become so superior to our own intelligence and ability’s that we will subject oneself s as they were gods. These thought was the fundament for AUJIKS doctrine and then later developed in to something that reminds of theological dualism were the original nature (trees, metals, organism etc)is considered esoteric chaos and the refined nature(computers, robots, DNA-manipulation etc) is considered esoteric order. The resistance between those has during the years decreased and will one day converge in a pyramid shaped top that will fill the world with clarity and supreme truth. By creating organic/synthetic artifacts AUJIK believe they will reach this level a lot faster than it is destined. Music: Mira Calix – Hiccup from the album Skimskitta. Written and produced by Mira Calix. ©Warp music 2000.

Biography:
AUJIK. initiated in 2001 by Swedish artist Stefan Larsson living in Kyoto, Japan. Concept: AUJIK are an esoteric and animistic cult who worships nature that they divide in to primitive(stones, plants etc) and refined (robotic, AI etc), they create artifacts consisting of synthetic and organic material that they transcends with in various tasks and rituals. AUJIK been presented at Prix Ars Electronica 2011, Onedotzero 2010&2012;. Japan Media Arts Festival. CMoDA, SIGGRAPH Asia and at gallery’s in Tokyo, Osaka, Kyoto, Yokohama and Berlin.